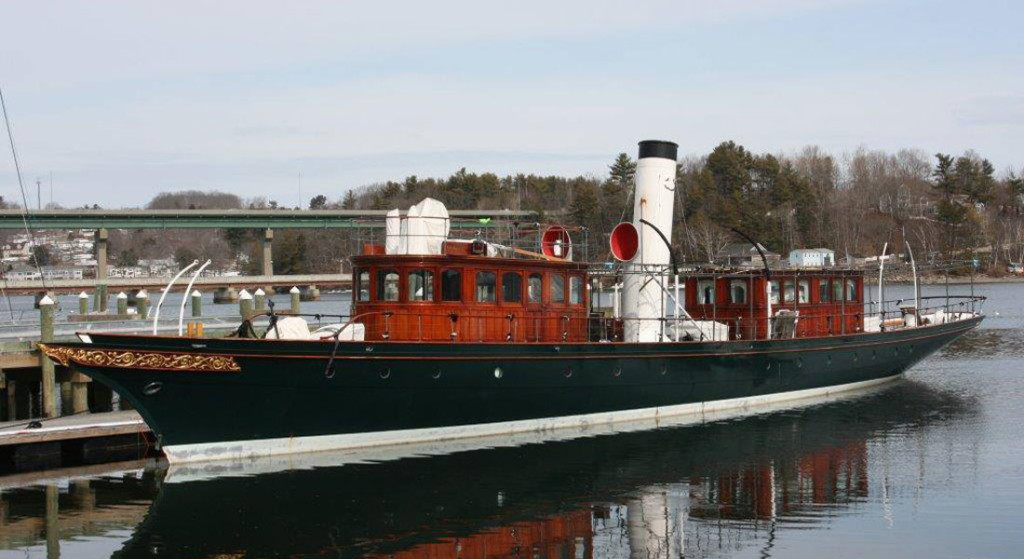 In 1901, an American lumber mogul by the name of Charles Canfield took delivery of a 126-foot (38.4-meter) luxury steam yacht. She was impressive for her time, even more impressive if you consider her bowsprit made her 138 feet long. Cangarda was christened in honor of Canfield and his wife, Belle Gardner. Several changes of ownership and more than 100 years later, Cangarda is the last of all the steam yachts ever built stateside. She still has her original engines, in fact, and is currently at Front Street Shipyard for a refit.

While the Maine-based yard is increasingly attracting a number of famous yachts, the steel-hulled Cangarda is famed for a number of highs and lows that have occurred over her history. She was built in Delaware by Pusey and Jones, a notable yard from the mid-1800s through the mid-20th century. Among its other deliveries: the famous Savarona. Cangarda was fitted with a deckhouse of Cuban mahogany and a mahogany-paneled interior, further featuring skylights with Tiffany glass panes. Seven (yes, seven) steam engines powered her, to the delight of the guests who stayed in the four staterooms and due to the hard work of a crew of eight. One of Cangarda’s most famous cruises occurred in 1927. That’s when King Edward VIII of England, the prime minister of Canada, and the prime minister of England were invited aboard by the then-owners, Canadians, for a dinner cruise in Ontario. Since Cangarda passed along the Canada-United States border, citizens from both countries waved and cheered. 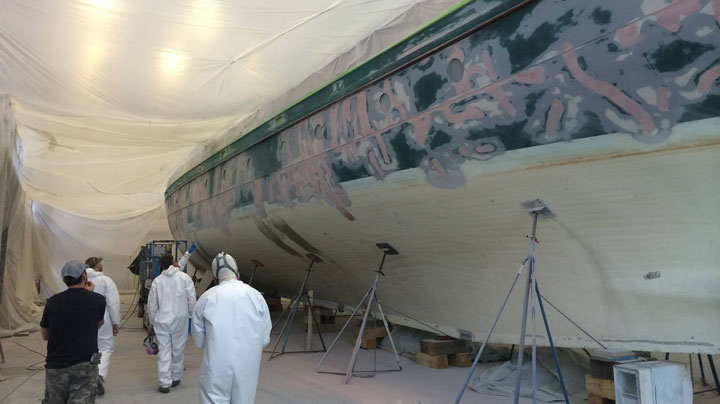 Sadly, Cangarda was nearly lost in the late 20th century. A Boston-based owner in the early 1980s was able to only partly restore her. He did have her original steam engines dismantled and sent to England successfully for refurbishment, but he reportedly became sick and could not complete the rest of his plans. In 1999, Cangarda, still only partially restored, sank in Boston Harbor. Elizabeth Meyer, who gained renown for salvaging the J-Class Endeavour, had her raised and partly rebuilt. A West Coast yachtsman then acquired her in 2004 to complete the revival. Due to the sinking, the hull had to be built entirely new. Thankfully, though, the mahogany interior had been safely on land awaiting re-installation when the 1999 sinking occurred. Therefore, much of it could be put back in place aboard Cangarda.

It took four years, but Cangarda emerged ready to cruise. She has since visited Ontario and made frequent trips to Mystic Seaport Museum in Connecticut. Cangarda has been in private hands since then, though she is occasionally available to the public for tours. She is expected to continue doing the same once Front Street Shipyard completes the refit.