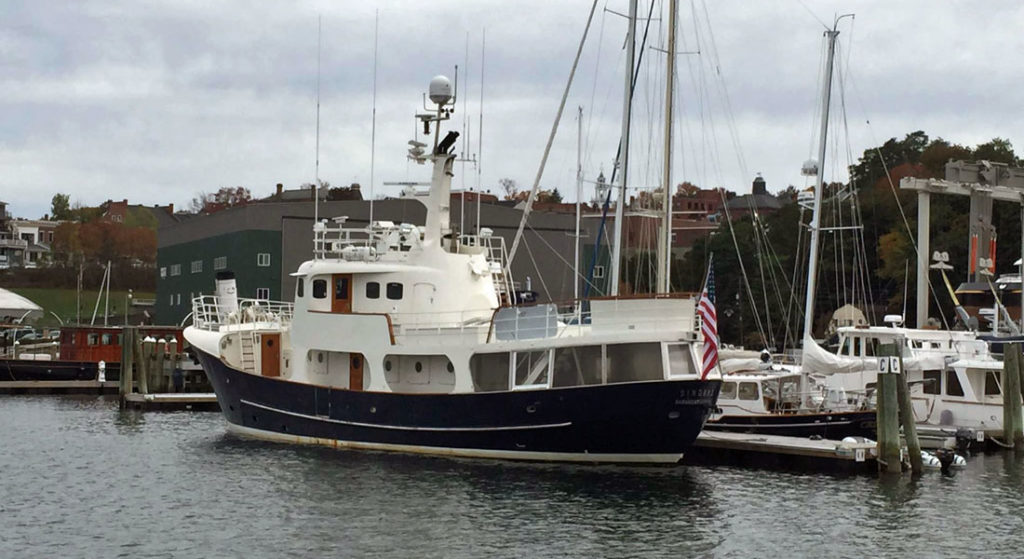 The steel-hulled Sinbad, which started life half a century ago, is embarking on a major refit. It’s one that Front Street Shipyard says poses a challenge for its entire shipyard crew.

Sinbad has an interesting history. Completed in 1962 in Norway, she was the 16th launch following World War II for her builder, A. Eidsvik. She served as a North Sea trawler, measuring about 80 feet (24.38 meters), meant for navigating in icy conditions, too. In the early 1990s, a yachtsman acquired her, converting her for yacht use. Sinbad gained accommodations and relaxation areas for a party of eight. She cruised with this owner along the East Coast of the United States and in the Caribbean.

Fast forward to today, and Sinbad is in the hands of that owner’s son. She arrived at Maine-based Front Street Shipyard earlier this month. Unfortunately, she “has had minimal maintenance in recent years,” according to the yard. “We’ve got our work cut out for us.” The owner of Sinbad and the yard team reviewed a surveyor’s detailed report together to pinpoint the tasks needing tackling.

The first order of business is removing the bottom paint to uncover, and address, possible corrosion in the hull plates. Soon after, Front Street Shipyard will inspect the twin Caterpillar engines and then either repair or replace them, based on further input from Caterpillar itself. Sinbad is definitely gaining a five-blade fixed-pitch propeller, though, in place of the current variable-pitch propeller. The propulsion overhauls should still permit Sinbad to see a cruising speed around 8 knots and a range of about 4,500 nautical miles at that speed.

Multiple other systems are getting repaired or replaced, too. These include ones for fuel, fresh water, and black water, plus hydraulics. Modern-day sensors will go into the majority of the systems regardless. Front Street Shipyard adds that much of Sinbad’s wiring doesn’t meet current standards, so it, too, needs replacing. So do most of the electronics, due to age and undue wear.

The refit work will continue out on deck. Sinbad shows signs of corrosion along her caprails, so Front Street Shipyards will address the issues. Its in-house joinery shop will create new caprails, too. A number of doors and hatches along the aluminum superstructure need replacing as well.