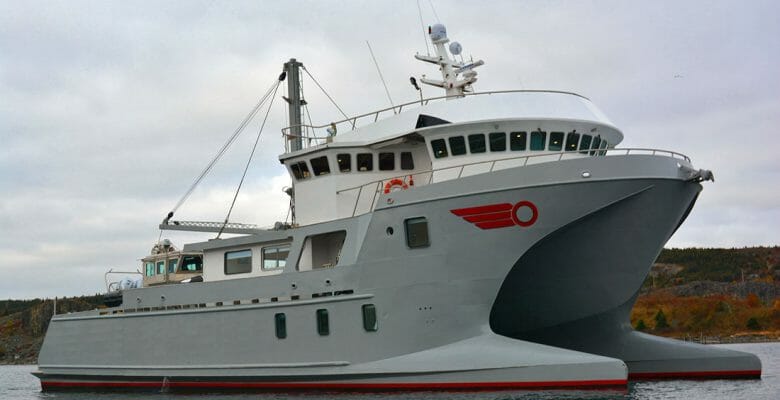 Built in 2004 as a fishing vessel, Rogue was refitted under the guidance of Ocean Voyager. The company specializes in ambitious projects like this. Indeed, Ocean Voyager is responsible for the conversions of a few unusual craft. These include Pink Shrimp, a 105-footer (32-meter) known as much for her owners as she is for her physicality. Belonging to famed yachtsman Jack Setton, she started life as a shrimp boat in 2000. In 2007, Ocean Voyager transformed her into a rugged expedition yacht, retaining much of her original commercial character.

Ocean Voyager performed the conversion of Rogue over much of this year in Newfoundland. It further did so on spec. (She’s therefore for sale for $3.85 million, via Fraser Yachts.) Ocean Voyager selected the boat because of her catamaran configuration, which promises stability and efficiency. Catamarans also provide acres of space for support craft. Rogue is well suited as a shadow boat or go-anywhere primary yacht, toting various serious toys. She totes a 25-foot (7.6-meter) aluminum tender, for example, that’s as unusual as she is. It’s built by SAFE, an American company supplying military and law-enforcement officials globally with durable craft. The same crane that launches the SAFE boat can also deploy a personal sub.

Rogue may further take you by surprise inside. The incredible volume due to the 30-foot (9.14-meter) beam is surely unexpected. More to the point, though, the decor is decidedly simple. Some might say it’s spartan. But, consider her purpose. Rogue is not meant to be a hotel or fine home that happens to float. She’s an adventure-seeker, designed to take a party of six (and crew of five) anywhere and everywhere.

“Anywhere” might actually be an understatement. A reported 7,000-nautical-mile range is at your disposal. The eight-foot (2.44-meter) draft means Rogue isn’t restricted to deep waters, either. Twin Cummins engines should permit a 12-knot cruise, too. And, you needn’t rely on gensets alone for the hotel load. Rogue is outfitted with a 2,500-watt solar-power system, LEDs for primary lighting, and a substantial battery bank.

Here are a few brief additional looks at Rogue: