You are here: Home / Videos / Superyacht Yas in Hamburg: VIDEO 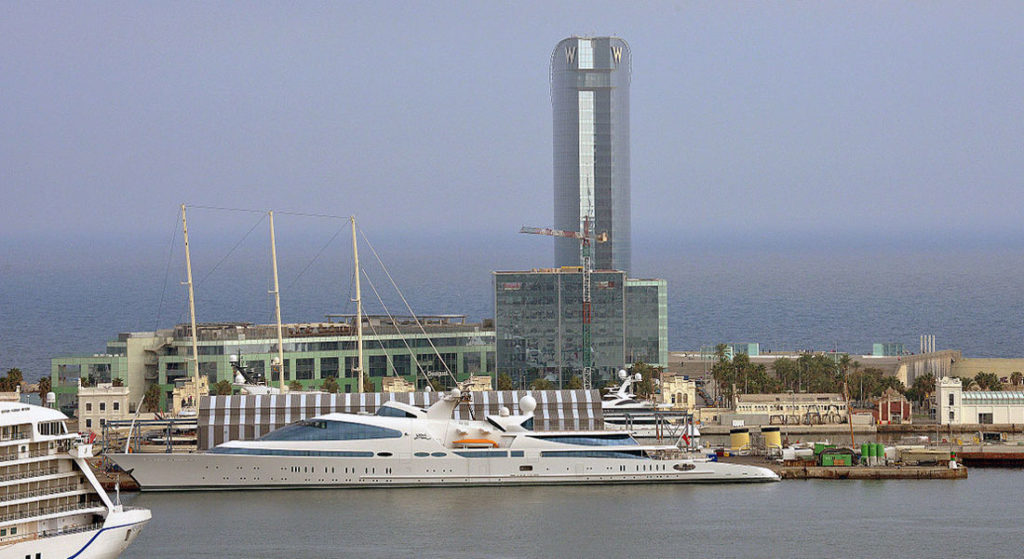 While Yas launched in 2011, her structure dates back to the 1980s. She started as a Royal Dutch Navy frigate, measuring 426 feet (130 meters). In 1998, the United Arab Emirates Navy acquired her. But, it didn’t end up using the vessel. Nine years later, the government sold the ship to a private individual, who saw an opportunity for an interesting conversion project.

That conversion project bore the code name Swift141. “Swift” was a reference to her performance. Frigates are, in some cases, meant for high-speed deployment. ADMShipyards (known as Abu Dhabi Mar during the conversion) announced that Yas would top out at 26 knots. The “141” was a reference to the post-conversion LOA in meters, equivalent to 463 feet.

The owner brought in Pierrejean Design Studio to reimagine the lines with abundant curves, while preserving the frigate hull shape. The design firm got pretty imaginative, especially with how much glass is aboard and how complex the biggest portion’s shape is.

Speaking of shapes, the superstructure of Yas is the world’s largest all-composite section. Three American companies jointly created it, since Abu Dhabi Mar didn’t have the skills in house.

Some of the noteable creature comforts aboard Yas include an aft-deck pool. The owner or Very Important People can fly out to her at anchor and land on the upper-deck helipad. Overall, 60 guests get to stay aboard. Neither ADMShipyards nor the owner has ever publicly revealed photos of that interior, other than the wheelhouse. But, that has not stopped people from the Middle East to Europe (where she was spotted in Barcelona, in the photo above, in December) finding her fascinating overall.

Here, a passer-by caught her cruising into the port of Hamburg, Germany over the weekend. A few times in the video, you can see crewmembers out on deck, putting her dimensions into better perspective: