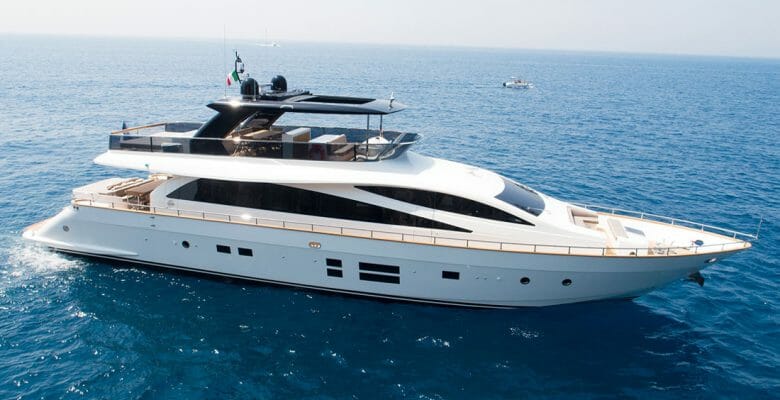 The fuel-efficient, semi-custom Amer 94 series from Amer Yachts has attracted another buyer. Hull number three is under construction for delivery next year.

Like the first two launches in the series, Baccarat and Visionaria, the megayacht features Volvo Penta’s IP system. Three 900-hp powerplants will be aboard, in fact. Amer Yachts chose IPS for the Amer 94 series for a few reasons. Significantly, it offers better fuel consumption. It’s proven to have about a 30-percent better fuel burn, for example. The shipyard says that at 10 knots, the megayacht should consume only 14 gph. At 20 knots, she should consume 69 gph. Furthermore, IPS boosts range by about 40 percent in comparison to traditional diesel drives. The Amer 94 should see 1,346 nautical miles at 10 knots. At 20 knots, she should achieve a range of 538 nautical miles.

The Volvo Penta IPS system keeps draft low, too. The Amer 94 draws just 6’1” to the tip of her propellers. And, in combination with the fiberglass construction methods, the yacht should also be quieter. The propulsion system is engineered for lower sound and vibration. The “loudest” sound levels aboard the Amer 94 should be on the flying bridge, if previous test results hold true. The shipyard has measured 68.3 decibels there while both gensets and a stabilizer were active, with the yacht traveling at 26 knots. (Thirty is the anticipated top speed.) For comparison, 65 decibels is the level of normal conversation.

The performance parameters are just part of the equation at Amer Yachts. The Amer 94 also offers flexibility in terms of the interior design. Clients get a choice of three, four, or five staterooms. The shipyard has not said what hull number three’s owner wants. The owner of Baccarat, though, selected four. It’s also interesting to note that two different four-cabin configurations are available, with one having a gym that converts to a stateroom.