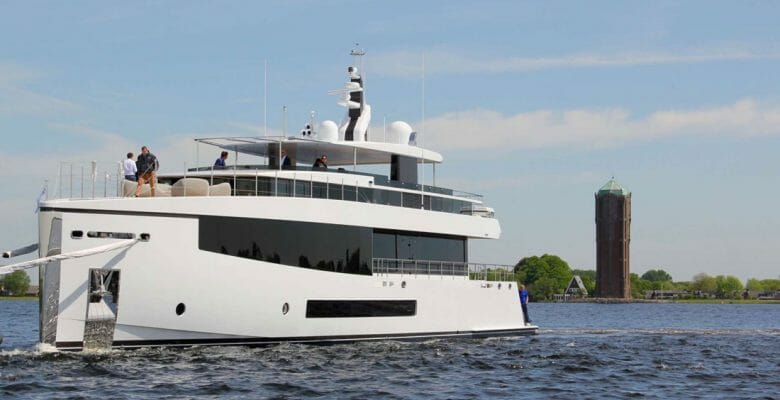 While CID hasn’t been delivered yet, she’s already undertaken a maiden voyage. Sort of. Following launch today, she explored some of the canals surrounding Feadship’s shipyard in Aalsmeer, The Netherlands.

If you’re getting the impression that this 114-footer (34.65-meter) is atypical, you’re right. She’s one of the smallest Feadships making a splash this year. However, she remains fully custom. CID features all-aluminum construction and prioritizes accessing bays and berths off limits to larger craft. The 5’9” (1.8-meter) draft will see her pull into ports along Mexico’s Pacific coast come winter, for example. Baja California follows next summer. All this, after her first summer season this year exploring the fjords in Europe and other Med locales. Regardless of where she goes, she should see a 20-knot top speed. The 3,200-nautical-mile range at 10 knots, under MTU power, should ensure all aboard see plenty along the way.

Yet additional atypical facts: The owner not only intends to join the upcoming sea trials, but also plans to take CID’s helm following delivery. He’ll do so primarily from the flying bridge, beneath the shade of the hardtop. (When he would rather relax, the full-time crew takes over driving duties.)

He also plans to entertain primarily on this deck. Sixteen people can dine together here—or spread out on sun lounges, or watch TV. The space allocation on the flying bridge is significant. This may surprise guests, several of whom are experienced owners themselves. The deck stretches nearly the full yacht length.

De Voogt Naval Architects not only allocated that space, it also designed the glass “walls” on the main deck. The owner’s suite and saloon flood with light as a result. The studio specified the extra-long ports flanking each side below decks, too, benefitting the four guest staterooms.

A casually cool atmosphere characterizes the interior of CID. Marty Lowe Interior Design, the owner’s longtime designer, selected furnishings and accessories while Bannenberg & Rowell Design used oak, walnut, and wenge to set the scene. Wood soles flow underneath on the main deck as well. Overall, things are deliberately simple, to enhance the feeling of space due to eight-foot (2.45-meter) headroom and nearly 26 feet (7.9 meters) of beam.

Well, not everything is simple. CID has a big-screen TV as well as a big projector screen in the saloon, for watching two sports at once. That’s entertainment, folks.