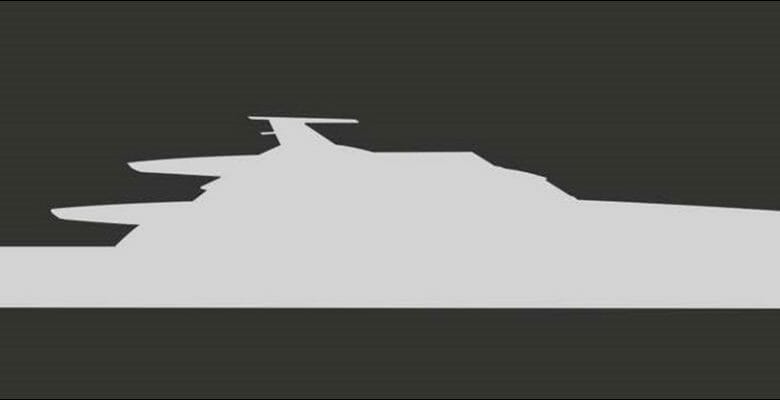 This silhouette is all that we get to see, for the time being, of a project Rossinavi recently signed. Known for now as FR038, her hull number, is an all-aluminum megayacht promising an interesting “swing of spaces,” in the shipyard’s words, inside.

Project FR038, measuring 163 feet (49.7 meters), is an entirely aluminum yacht, remaining beneath the 500-gross-tons mark as per the owner’s wishes. Simultaneously, especially for Rossinavi, it was key to take advantage of volume as much as possible. With a beam of 29’5” (9 meters), she splits her daytime and nighttime spaces over two decks.

While unfortunately Rossinavi cannot yet divulge details on all of those spaces, a few facts are still available. For example, on the upper deck, FR038 has what the shipyard likens to a “crystal veranda.” Essentially, the enclosed relaxation area becomes an entirely alfresco area. Even as an enclosed space, though, it still lends a sense of being outside, due to significant-size windows.

Over the past year, details like this, along with a big beach club, took shape via the hand of Luca Dini of Luca Dini Design. In fact, the owner’s representative, Kurt Lehmann of Yacht Moments, introduced the owner and Dini at that point. Having enjoyed the cruising lifestyle for some time, the owner conveyed his love “for yachts with sportive character,” Dini explains. In addition, the designer adds, the owner wanted “a superyacht for long-range navigation and maintaining generous outdoor spaces.” Interestingly, Dini and Lehmann then collaborated to translate the owner’s other wishes, before presenting a final design for approval.

Once that approval came, the owner’s team approached Rossinavi. The shipyard considers the crystal veranda and other yet-to-be-disclosed features to be attention-getters, especially for buyers who also value the sub-500-gross-ton mark.

Once Rossinavi sets FR038 into the water, expect to see the megayacht make a maximum speed of 23 knots. Cruising speed should be 19 knots.