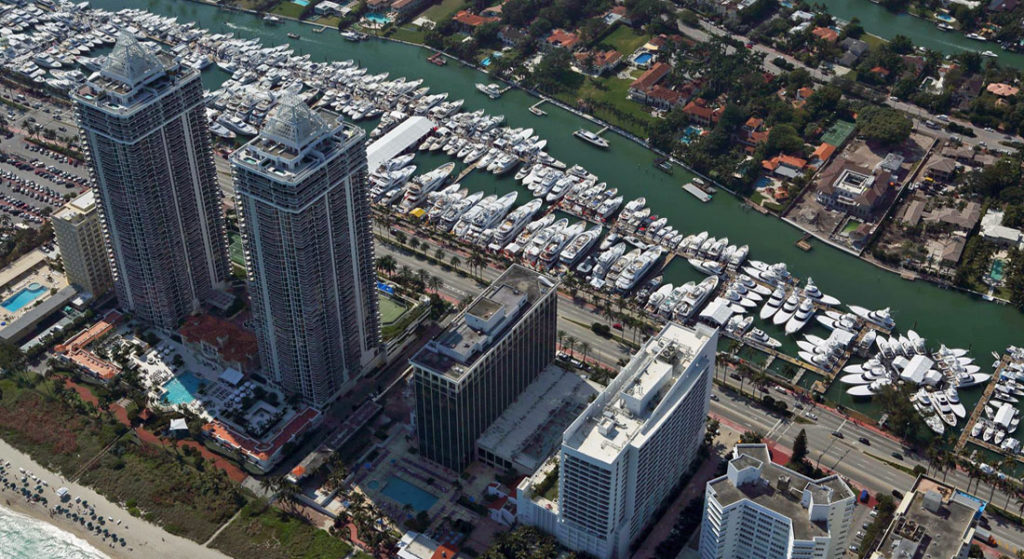 Yesterday was the last day of the annual Miami Yacht Show—and the last day at its longtime location in Miami Beach (above). Starting next year, pending permit approvals, it relocates closer to downtown Miami. The waterfront that organizers have in mind is undeveloped. However, it includes land and water rights owned by Resorts World Miami, a company connected to casinos worldwide.

Currently, the Resorts World Miami site serves as a venue for music and other entertainment. It comprises more than 14 acres along Biscayne Bay and formerly served as the home to the Miami Herald. It’s adjacent to the Adrienne Arsht Center for the Performing Arts and the Sea Isle Marina. Furthermore, it doesn’t have the depth or width restrictions of the Indian Creek Waterway, the Miami Yacht Show’s home for 30 years.

Equally important, the site is a stone’s throw from Watson Island, where large megayachts have been part of the Miami Yacht Show for the past few years. Plus, it’s closer to the Miami Marine Stadium on Virginia Key, home to the Miami International Boat Show. Because the shows overlap, and some visitors attend both, the new location should be more convenient. “This is a collaborative move that is designed to make Miami’s boat show week an easily accessible, interconnected system of events,” explains Andrew Doole, general manager of Informa. Informa co-owns the Miami Yacht Show as well as produces it.

While permits await approval, the ultimate goal is to provide more on-land exhibit space for luxury-sector exhibitors. These include private aviation and automotive firms. In addition, the Miami Yacht Show would gain more space for VIP lounges, along with entertainment and dining options. As for the Watson Island exhibits, water taxis would take guests between the locations. The latter would be a significant improvement over the previous arrangement. Shuttle buses or private cars were the only way to get around, with traffic often an issue.

Speaking of issues, the Resorts World Miami site would solve yet another: parking. It reportedly puts 3,500 parking spots at visitors’ and exhibitors’ disposal.

No details are available on how many yachts and megayachts would be in the water. There’s also no information on the dock arrangements. Regardless, the show would still include new- and brokerage-yacht sections.

As for Resorts World Miami itself, the vision is for a multi-use development, including bars and nightclubs, retailers, entertainment and convention space, as well as two condo towers. Gambling rights do not exist, though a petition is pending.