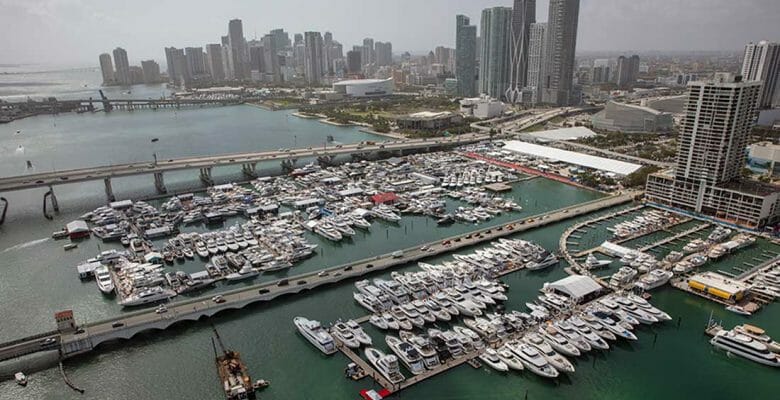 A new partnership between the organizers of some of the largest South Florida boat shows is uniting the three Miami-based events under a common name. Starting next year, the Miami Yacht Show and SuperYacht Miami are rebranding under the existing Miami International Boat Show banner.

The joint show will take place February 16 through February 20, 2022, which is Presidents’ Day weekend. Traditionally, this has been the weekend for the previously independent events. (SuperYacht Miami is a component of the Miami Yacht Show, but with a separate location, access, and exhibits.) Furthermore, the locations remain in Miami Beach and downtown Miami. Specifically, they’re the Miami Beach Convention Center, Sea Isle Marina, One Herald Plaza, and Island Gardens Deep Harbour Marina. Note that some exhibits relocated to Miami Marine Stadium (below) the past two years, since the convention center was renovating.

The organizers joining forces are Informa Markets, which co-owns and produces the Miami Yacht Show and SuperYacht Miami, and the National Marine Manufacturers Association (NMMA), which owns the Miami International Boat Show. Under the new partnership, Informa will manage the rebranded and united event, with input from the NMMA. The organizations retain ownership of their respective shows, though. As to why the Miami Yacht Show and SuperYacht Miami are rebranding, the organizations say long-standing conversations between them drove the decision. These centered on how to serve the industry while simultaneously deliver a heightened attendee experience. Therefore, they pledge that the new Miami International Boat Show will include expanded educational components. Both virtual and in-person offerings are in the works, too, as are live concerts. 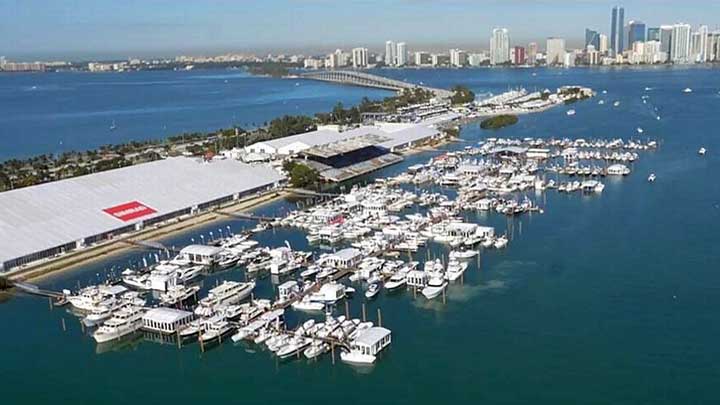 Furthermore, they plan to simplify transportation methods, a longstanding criticism. They’re creating “a comprehensive traffic-management plan,” according to a press release, with Miami and Miami Beach officials. Water taxis, ride-share options, and public transit are all part of the plan as well.

In announcing the rebranding, Frank Hugelmeyer, the NMMA’s president, says, “There remains no better place to attract and engage consumers while promoting the boating lifestyle than boat shows. At the same time, to continue doing so, boat shows must evolve.” Consumers are increasingly seeking information and shopping online, he continues, “and even before COVID, they began seeking more engaging and rewarding in-person experiences. How we address these shifts as an industry is vital.” Hugelmeyer additionally notes that the NMMA will use its Discover Boating branding for the event.

Andrew Doole, Informa’s president of U.S. Boat Shows, agrees. “This year, despite innumerable challenges, our community proved its resilience, and the passion we have seen from manufacturers and buyers alike has strengthened our resolve to create even more meaningful experiences for boating and yachting professionals and enthusiasts.”

The joint venture has no impact on 2021 events. In fact, Informa postponed the February 2021 Miami Yacht Show and SuperYacht Miami last November. Additionally, Informa indicated it was seeking a later date to host them. No new information has come since that announcement, however. The postponement quickly followed the cancellation of the Miami International Boat Show by the NMMA.