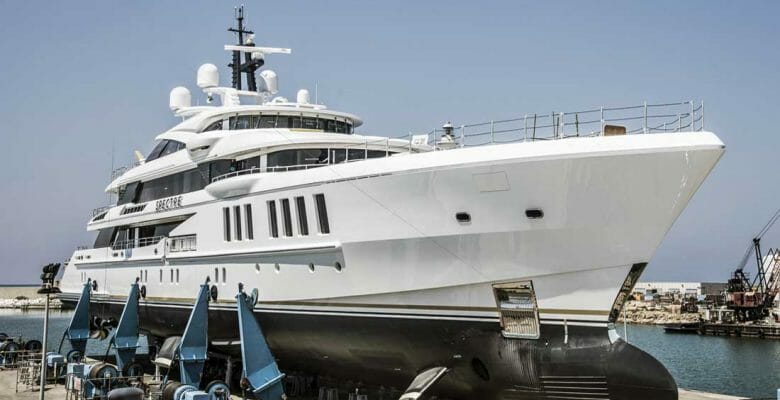 For Your Eyes Only. Moonraker. Quantum of Solace. Diamonds Are Forever. Skyfall. And now, Spectre. The James Bond-themed fleet of John and Jeanette Staluppi saw its latest member slip into the water yesterday. The superyacht Spectre, at 227 feet (69.3 meters), is the third Benetti for the native New Yorkers. Furthermore, she’s their biggest boat yet.

With an impressive volume exceeding 1,400 tons and rising five decks high, the project came to light in 2015. Back then, Benetti revealed just scant details, including a smaller LOA of 216 feet (66 meters). Since John Staluppi has a penchant for performance, the yard also revealed she’d exceed 20 knots at top speed. Staluppi himself promised some leading-edge design and technologies would also be involved. A year later, the naval architecture studio Mulder Design, Mulder Design responsible for her hull design, provided insight. The superyacht Spectre was to boast speed at extra efficiency.

Specifically, the yacht would have what Mulder Design calls a high-speed cruising hull. She’s reportedly capable of 21.2 knots, compared to the 14- to 17-knot top speeds of most similar-size craft. “This lets you enhance the experience onboard because the trip is shorter to the next destination,” Frank Mulder explains. He gives the example of traveling from Capri to Porto Cervo in Sardinia. With a traditional full-displacement megayacht, he says, it’s about an eight-hour trip. But, with Spectre, an early-morning departure should put her in port by lunchtime. In addition, she still delivers long range, an expected 6,500 nautical miles at 12 knots.

Of course, the Staluppis are renowned for their yachts’ decors. Though we don’t have photos, the superyacht Spectre should not lack the “wow” factor. It blends Art Deco with 1920s French design. In working with Benetti’s in-house department, they created distinct geometric patterns, for instance. The theme flows through the six staterooms, including two VIPs and two owners’ suites. (One of the suites has a balcony, a hot tub, and a sunning area.) With a 38-foot (11.7-meter) beam, the yacht additionally has nine cabins for the crew and captain.

Much more to come on Spectre once she’s delivered.