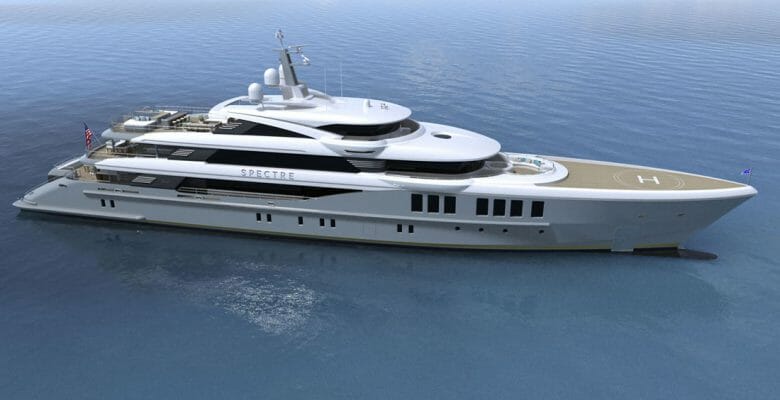 About a year ago, Benetti divulged scant details about FB269 for John and Jeanette Staluppi. A hint of a profile, an LOA of 216 feet (66 meters), and a top speed upwards of 20 knots were it. Now, thanks to a conversation with Frank Mulder of Mulder Design, we know that Spectre will be both faster and more fuel-efficient than you’d expect of a 226-footer (69-meter).

John Staluppi is renowned for his love of Bond movies. He’s christening numerous megayachts after them over the past 30 years. The name Spectre therefore comes as no surprise. Neither does the fact that the yacht will see good speed. The Staluppis’ 116-foot (35-meter) Moonraker became the world’s fastest yacht during sea trials in 1992. She hit 66.7 knots. Twelve years later, The World Is Not Enough hit 67 knots. That 139-footer (42.4-meter) still holds the record.

By comparison, the 21.2-knot anticipated top end for Spectre seems sedate. But, most megayachts in her size range max out closer to 14 to 17 knots. The difference is not due to engine boosters, it’s due to the hull design. Mulder Design terms it a high-speed cruising hull. It’s not speed for speed’s sake. “This lets you enhance the experience onboard because the trip is shorter to the next destination,” Mulder explains. He gives the example of traveling from Capri to Porto Cervo in Sardinia. With a traditional full-displacement megayacht, he says, it’s about an eight-hour trip. But, with Spectre, an early-morning departure should put her in port by lunchtime. 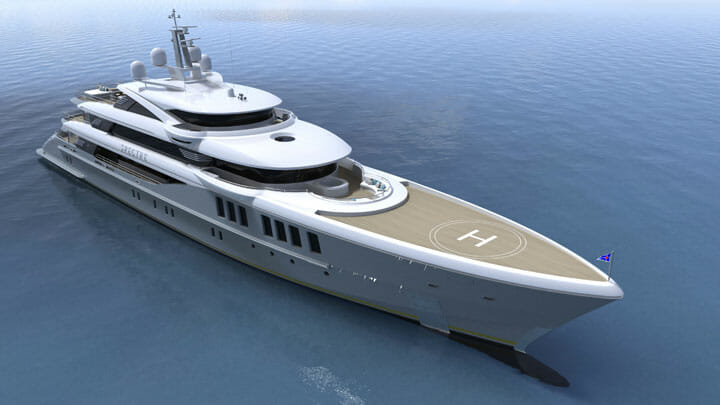 That same hull design lets Spectre use twin 12VMTU 4000 Series engines, “modest,” in Mulder’s words, for her LOA. The combination of the design and engines should let Spectre travel more fuel-efficiently. Mulder says that Spectre will see a range exceeding 7,000 nautical miles and consume 33-percent less fuel than comparably equipped displacement yachts on long crossings. This, without compromising on interior design elements or systems. Spectre will carry about 31,701 gallons (120,000 liters) of fuel.

All of this comes with a steel hull, too. It seems a contradiction to employ steel versus aluminum for a somewhat speed-oriented yacht. Mulder Design did study aluminum for Spectre, “but it was not a big difference, only 2 knots, so not really a completely different boat,” Mulder says. Plus, he adds, aluminum requires more complex sound attenuation.

Creating Spectre’s hull design was no easy task. Mulder Design went through 25 different versions, based on military vessels and other proven swift craft, before being satisfied across the board. Besides the above-mentioned speeds and fuel-efficiency, Spectre needed Bahamas-friendly draft. The Staluppis have long loved cruising there. At about one-quarter load, Spectre should see a draft of 9’5” (2.9 meters), which will let her reach some of the island destinations. (Full-load draft is 10’5”, or 3.2 meters.)

Furthermore, Mulder Design wanted pitch control, not just roll control. The faster a vessel, the most subject it is to pitching motions. The studio selected Naiad’s Ride Control System. It reduces roll and pitch via multiple control surfaces. (For comparison, roll stabilization typically just employs fins.) Mulder Design and Naiad tailored the arrangement for a 40- to 45-percent reduction in Spectre’s vertical motion, Mulder says. Equally noteworthy, he says it will result in just a 0.15-knot speed reduction.

Spectre, with styling by Giorgio Cassetta Design and Benetti, should launch in 2018.