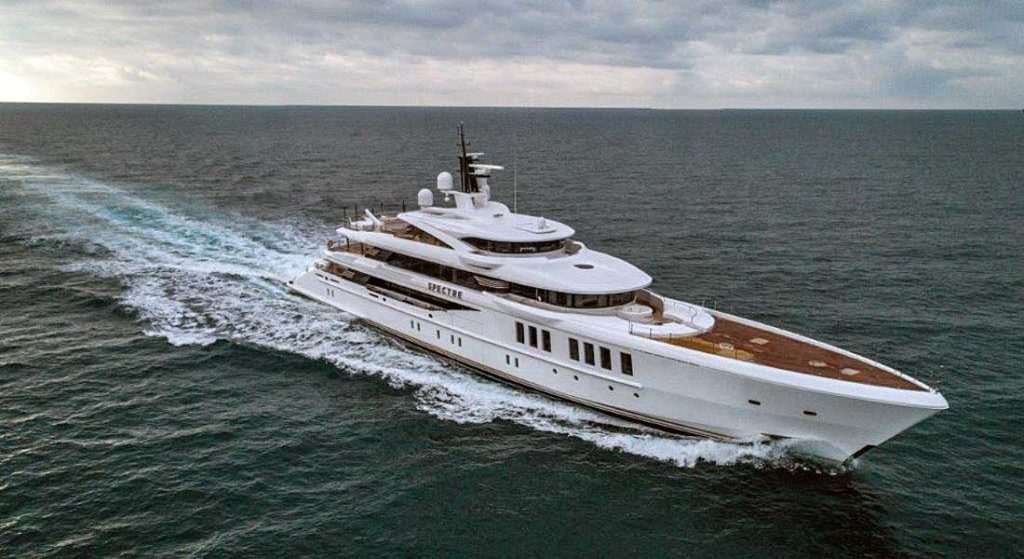 Displacing 1,000 tons at full load and the result of 750,000 man-hours, Spectre is about to see her maiden voyage. Well-known and well-experienced American yacht owners John and Jeanette Staluppi took delivery from Benetti in a formal ceremony at the shipyard today. Even with all the custom yachts they’ve owned, Spectre breaks new ground.

The 227-footer (69.3-meter) does so in several ways. First, her sporty styling, from Giorgio M. Cassetta, complements a surprisingly sporty performance. It’s surprising due to her LOA. Few 200-foot-plus superyachts are capable of a reported 21.2-knot top speed. This, according to the naval-architecture studio Mulder Design, is 30 percent higher than traditional displacement yachts. This fulfills the Staluppis’ request to feel as if they’re in a car on a racetrack. Mulder Design created what it calls a High Speed Cruising Hull, which further lets Spectre boast speed at extra efficiency. Her twin MTUs should consume about a third less fuel on long crossings than if she were a traditional displacement yacht, too. 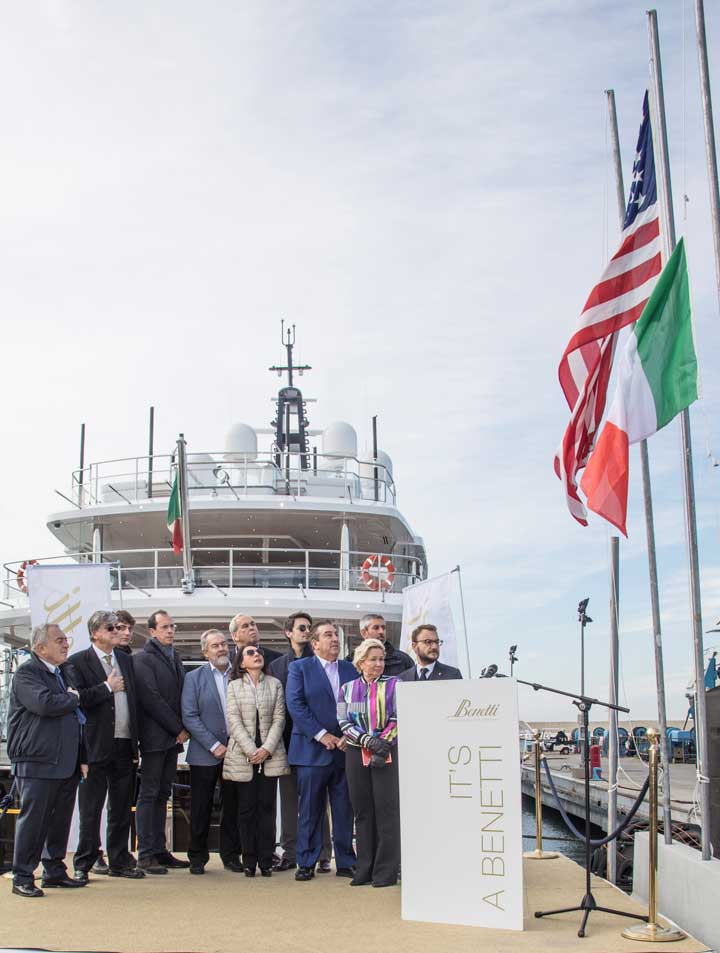 Further related to performance, Spectre is the first superyacht featuring Naiad’s Total Ride Control technology. This stabilization system, initially developed for commercial and naval craft, reduces roll as well as pitch. Mulder Design worked with Naiad to tailor it to Spectre. Frank Mulder of the design studio—marking its ninth collaboration with the Staluppis—says the technology “will greatly improve comfort when cruising at 20 knots.” On a related note, the megayacht should see 6,500 nautical miles at 12 knots.

Additionally setting Spectre apart is her interior design. The Staluppis (second and third from right in photo) collaborated with Benetti’s in-house team to emulate the Liberty style. This is the French version of art nouveau, from the late 1800s. Highlights of the arrangement include three staterooms on the main deck, one being a VIP that could be a second owners’ suite. Up one level, 1,184 square feet (110 square meters) of alfresco dining and relaxing areas await. Spectre’s skylounge, just inside from here, is equally large, about 969 square feet (90 square meters). The Staluppis have reserved the forward upper deck for their suite, complete with a private study and access to the bow as well as two side balconies.

The Staluppis didn’t overlook crew spaces, either. In fact, they made a point from the start of considering the 14 capable hands. The chef should particularly enjoy working aboard, given a pizza oven on the bridge deck. Wine service should also be special, due to four wine “cellars” lining the main-deck entry.

We’ll have a Megayacht News Onboard feature in the coming months, showing you the beach club, spa, and more.