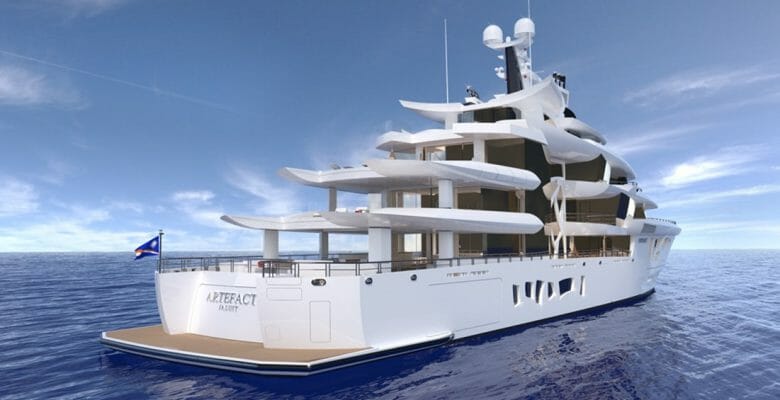 An artifact is something of cultural and/or historical significance. The team behind the superyacht Artefact asserts she represents the same ideas. She has radically different—to say the least—styling, highlighted by tons (literally) of glass and window shapes never before seen. Artefact also incorporates propulsion technology never previously used aboard yachts. In addition, significant environmental-minded technology supports her overall operations. All in a project marking a family’s first-ever yacht.

Artefact is the real name of a 262-footer (80-meter) under construction at Nobiskrug. Previously known as Project 790, the yacht has been kept pretty confidential. At a model unveiling and press event at the Monaco Yacht Show today, some of the key personnel involved divulged some truly eye-opening details.

For instance, naval architect Greg Marshall says the styling sprang from an office-wide concept competition a few years back. Their goal was to re-invent a 180-footer (55-meter). Geoff Harrington, a senior designer in his studio, came up with the spirit of what’s seen here. The shapes and sizes of the windows simply are unheard of in yachting, along with far more glass: bigger panes, as well as curved ones. By chance, Marshall says, a captain working with a family seeking to build their first yacht contacted him. Since the family wanted something quite different than in existence, Marshall showed the captain Harrington’s design. 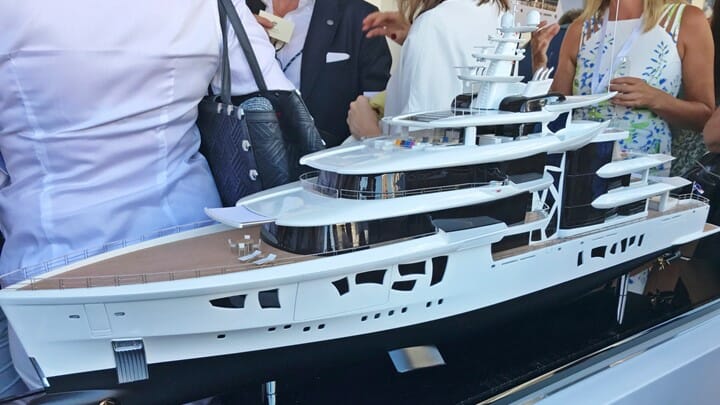 The captain, Aaron Clark, alerted the family to the design, and they loved it. Just one request: make it bigger. While she grew a few times on paper, Artefact never strayed from “the purity of the design concept,” Marshall says. With the size finally set, along with a must-have hybrid propulsion system, Clark and Marshall sought Nobiskrug to make her come to fruition.

The technical challenges behind Artefact, with a steel hull and composite superstructure, are many. For instance, the above-mentioned glass totals 70 tons, according to Marshall. For another example, ABB developed the hybrid-propulsion system that, while a first for yachting, is proven technology. It employs a DC bus and batteries, along with azipods and variable-speed Caterpillar 3516 gensets that are Tier III compliant. (Tier III is a strict low-emission regulation.) The hybrid system reduces sound, vibration, fuel burn, and emissions, plus mimics Dynamic Positioning. The owner believes Artefact should make little to no impact on the seafloor. Furthermore, solar panels “feed” the batteries.

Feeding the owner’s and his family’s soul: the views. Artefact has so much glass, and so many unusual windows, to ensure far better experiences while cruising. Minimal mullions ensure the same thing. Nobiskrug says Artefact has the highest ratio of glass to LOA for any yacht in her size range, too.

Unfortunately, Reymond Langton Design is still keeping most interior details quiet. However, Pascale Reymond, co-founder of the firm, says the window shapes and sizes were “a springboard” for the general arrangement and decor. They, along with the technological achievements, allow for “a clever yacht” with several cozy areas, and unexpected room locations. The master suite sits aft, not forward, for instance. There’s no concern here over sound or vibration transfer from the engine room. Guest entertainment spaces, meanwhile, are in low-acceleration areas.

More information about Artefact should come when she launches next year. She’ll further appear at the Monaco Yacht Show next September.