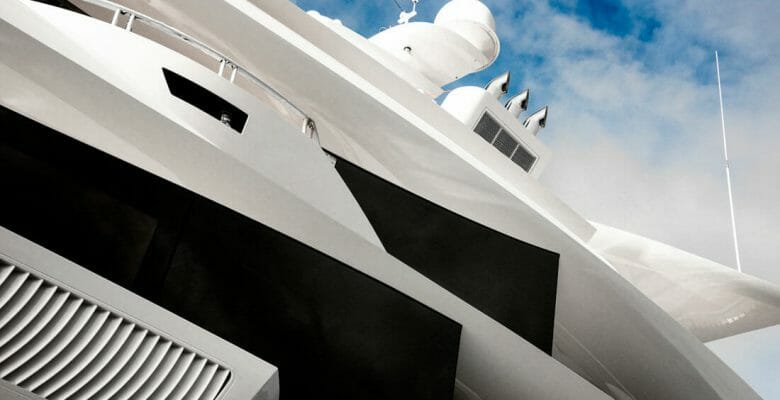 Of all the megayachts making their global premieres at the upcoming Monaco Yacht Show, this Nobiskrug surely will make the most heads turn. There’s an amazing story behind the arresting Artefact styling, which truly is one of a kind.

As much as all the international designers start with blank sheets of paper, inevitably some of them have signature styles. Similarly, owners admire particular yachts and ask designers to echo certain bow flare, or superstructure stance, or related looks. Not these owners, however. When they started yacht shopping several years ago, they wanted something dramatically different than commonly accepted yacht profiles.

Coincidentally around that same time, naval architect Greg Marshall held an office-wide competition. The studio’s designers were tasked with re-inventing the looks of a 180-footer (55-meter). Geoff Harrington, a senior designer, came up with the spirit of what you see here. The window shapes and sizes are the likes of which that have never been seen in yachting. Additionally, they’re much, much larger panes, and curved, too, no small task.

According to Marshall, one day a captain reached out to him. That captain just so happened to represent the family mentioned above. Marshall showed the captain Harrington’s design… the captain showed it to the family… and voila.

Well, almost. She grew a few times on paper, ultimately stopping at 262 feet (80 meters). However, Artefact never strayed from “the purity of the design concept,” Marshall says.

Enjoy her styling and her nearly 70 tons of glass. We’ll be onboard during the Monaco Yacht Show and plan a Megayacht News Onboard feature within the next few weeks.