Home / Yachts / Project Blue Out of Build Shed at Lürssen 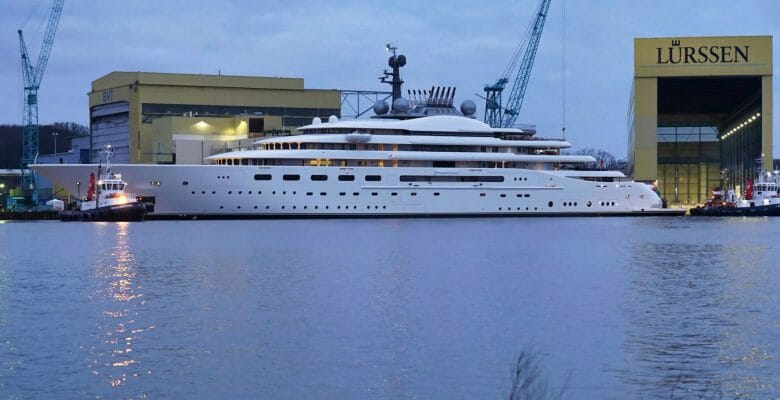 The early hours of the morning still permitted yacht watchers to catch good glimpses of Project Blue as she launched at Lürssen today. If she strikes you as being significantly large, you’re correct. Her length is just over 518 feet (158 meters).

More significantly, though, Project Blue has extraordinary interior volume, coming in at 15,320 gross tons. This fact—one of a scant few from Lürssen so far—means she outranks the largest yacht in the world. That yacht, Azzam, is coincidentally another delivery from the shipyard, too, dating to 2013. Specifically, Azzam’s gross tonnage comes in at 13,136. Her LOA is 592’6” (180.61 meters).

Even if you only take her length into consideration, Project Blue still comes in as one of the largest in the world. Notably, upon delivery sometime next year, she officially will be the fifth-largest megayacht in the world. She’ll outrank the current placeholder, Dilbar, which measures about 512 feet (156 meters). And interestingly enough, Dilbar, too, saw delivery from the same shipyard, in 2016.

With a beam of 68’9” (21 meters), Project Blue remains confidential in terms of amenities and designers. The video, however, does reveal two helipads, one occupying the entire foredeck. Furthermore, almost all of her alfresco areas are shaded as well.

In the meantime, the shipyard has several projects set for delivery and launch this year. In terms of delivery, Lürssen 1601 is among them. This megayacht, with styling by Espen Øino, celebrated her technical launch in May of last year. She shows off primarily planar surfaces that give her a more determined, venture-far look. The shipyard can’t disclose much about her yet, other than  that she has a healthy beam of 48 feet (14.7 meters).