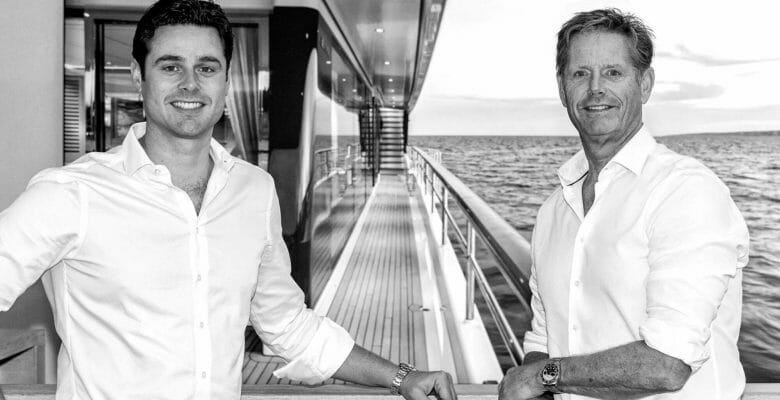 Dirk Robert Mulder (above right), better known as Dick Mulder, the managing director of the family-owned Mulder Shipyard in The Netherlands, died on July 24. The son of the yard’s founder, and leading its expansion into megayachts and international markets, he was 60 years old.

Dirk Mulder Sr. established the yard—under a different name, however—in 1938. Back then, the name was Jachtwerf de Watersport, which translates from Dutch as “Yacht Yard for Watersports.” Just 27 years old, he initially constructed sailing boats. About a decade later, the yard’s first steel-hulled sailing yacht launched, and in 1953 it launched its first motoryacht, at 24’6” (7.5 meters) LOA. Notably, she became the predecessor for Mulder’s famous Super Favorite Cruiser series.

Dirk Mulder Sr. stepped down at age 72 in the late 1960s, when Dick Mulder was still a schoolboy. (He was born in February 1962.) A replacement director therefore took the helm. Like many yachting-industry companies, the next generation of Mulders eventually entered the family business. Dick Mulder became the director at just 22 years of age, in 1984, after having served in the army.

Within a few years, Mulder Shipyard was building larger and larger motoryachts, with traditional flared sterns. By the late 1980s the Favorite Superior series emerged—and it continues today, as the Favorite series. Due to demand, the shipyard added another construction hall around the same period, although it soon needed yet another site. Under Dick Mulder’s guidance, that second site incorporated an indoor dock to avoid having to haul yachts. Additionally, it allowed constructing bigger yachts, with the first being the Mulder 70 Flybridge.

In fact, the 1990s and early 2000s saw Mulder Shipyard increasingly launching larger yachts and expanding into megayachts. Among the significant accomplishments, the Mulder 74 Flybridge splashed in 1998. The Mulder 88 Flybridge emerged as the first megayacht, too, in 2000. Even with the larger sizes and variety of designs, however, good seakeeping and good overall performance remained constants. The all-aluminum 88 Flybridge, for example, sees a reported 27-knot top speed.

In the ensuing years, those designs and performance parameters caught international attention. Dick Mulder met with clients as far as Russia and Egypt. Once again, due to rising interest and requests for larger yachts, in 2011 he decided yet another new facility was needed. It opened in 2013, six miles (10 kilometers) from the original Mulder yard, which remains in operation. The then-new site allowed for megayachts to 148 feet (45 meters). Arguably, given the global economic crisis still having a grip, it was a risky move. But, within two years, that site saw the largest Mulder delivery, the 112-foot (34-meter) Solis. In 2017, hull number one of the 118-foot (36-meter) Mulder ThirtySix, Delta One, followed. That latter series continues to be popular, with the recently delivered recently delivered Solemates being hull number five. On a related note, she’s for an American client—a relatively new market for the yard.

One of the most recent accomplishments under Dick Mulder’s watch was yet another shipyard expansion, the company’s fourth facility. In the northwestern part of the country, it has two hull sheds for projects to 50 meters (164 feet). It also has an interiors and teak-decking shed.

Maarten ten Holter, the yard’s senior sales executive and a longtime friend, recalls Dick Mulder’s innate knack for relating to buyers. “He was natural and charismatic,” he says. “He was not a seller, he was enthusiastic and passionate about the boats he built, and that transferred to his clients.”

Nick Mulder (above left), Dick Mulder’s son and the shipyard’s commercial director, continues to run operations, with ten Holter. Notably, Nick joined the yard in 2010—at age 22, the same as his father when he started. “It has been a privilege and an honor working alongside him and playing a part in helping to establish the iconic brand which Mulder is today,” he says. “Speaking on behalf of all Mulder employees, we are grateful for his leadership, advice, and friendship—and we will always remember him.”