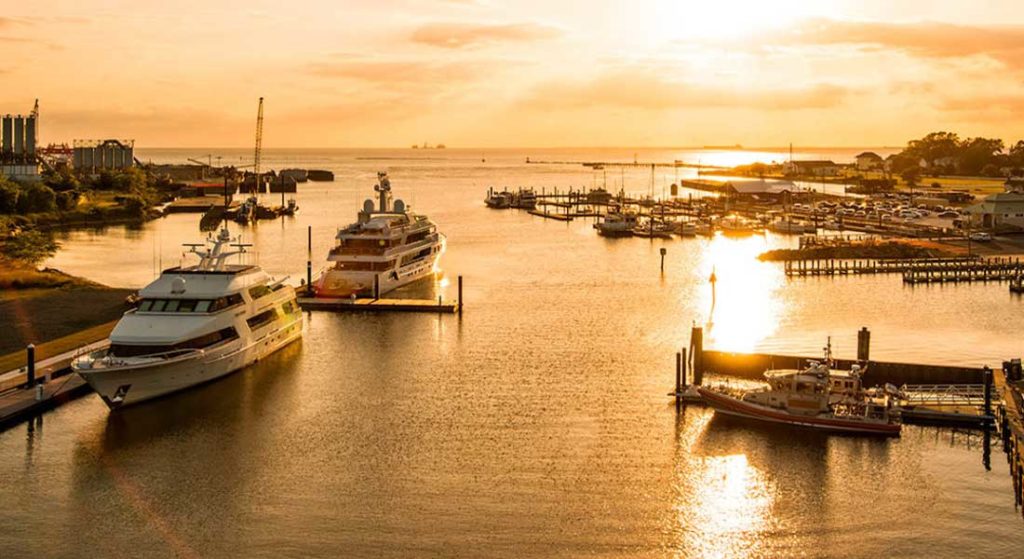 For the past five years, Cape Charles Yacht Center has been welcoming megayachts to the Eastern Shore area of Virginia. A team of investors that includes the head of Maine-based Front Street Shipyard is now operating it. The plans involve a significant expansion into superyacht service and refit.

Cape Charles Yacht Center officially opened in 2014, filling a superyacht-facility need in the Mid-Atlantic. Sitting at the mouth of the Chesapeake Bay, it’s on a deep-water (18-foot/5.49-meter) channel, additionally 12 miles from the Atlantic Ocean. Therefore, both power- and sailing yachts can access it. Today, it has 1,000 feet (305 meters) of face dockage, for megayachts to 200 feet (61 meters). It also has a 75-ton hoist, plus sits within a Foreign Trade Zone (FTZ), meaning a duty-free area.

JB Turner, president and co-owner of Front Street Shipyard, says that a few things made the facility attractive. “It’s central for vessels traveling along the East Coast between New England and Florida,” he explains. He adds, “For years we’ve encouraged our customers at Front Street Shipyard to stop into Cape Charles when traveling south, and their feedback has been very positive about the location, quality of service, and amenities.”

Joining Turner is Nicole Jacques, another Maine-based business owner. Her Rhumbline Communications is a marketing company with a special focus on launching new marine businesses into the global marketplace. Among her clients is Front Street Shipyard, though others include trade shows and suppliers. “We intend to maintain Cape Charles Yacht Center’s great reputation for service among their existing customers,” Jacques says.

According to Jacques, the first order of business is to expand the workforce. In addition, Cape Charles Yacht Center will gain more modern equipment. This will permit a multi-year expansion into service and refit. For example, a 600-ton mobile hoist is in the plans. So, too, are extra floating docks. Already, a service facility is in build. “International vessels seeking service and major refits,” not just American-based ones, are target customers.

Cape Charles Yacht Center, which is walking distance to downtown Cape Charles’ restaurants and shops, remains operational through the current construction. It will continue to do so as work ramps up.

While Front Street Shipyard itself did not acquire Cape Charles Yacht Center, the two anticipate having a symbiotic relationship, referring business to each other.