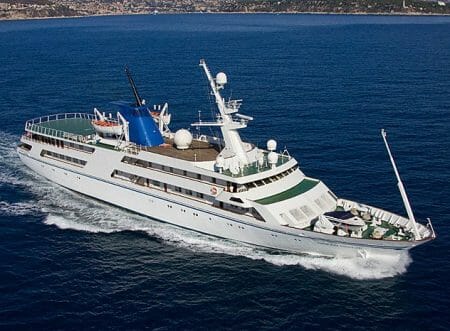 The 82-meter (269-foot) megayacht that the late Saddam Hussein commissioned but never used and which was the subject of a legal battle when she was put up for sale is on the market again, this time uncontested.

Basrah Breeze, commissioned as Qadissivat Saddam in 1981, is presently in Iraq, where the country’s ministry of transportation hopes to find a new owner. The yacht underwent a refit in Greece in recent months, to repair and update components and systems. Reportedly unchanged are the gold bath fixtures, private cinema, and other luxe touches.

While news reports thus far don’t mention an asking price, the superyacht was listed under the name Ocean Breeze in 2008 at $35 million. The seller was Sudeley Limited, a Cayman Islands firm partly owned by King Abdullah of Jordan. Shortly thereafter legal issues ensued. The Iraqi government contended that the yacht was illegally transferred from Hussein’s ownership and that she should instead be under its control. Ever since Hussein had been removed from power, the government had been on a quest to seize his assets worldwide, using the funds to support the Iraqi people. In 2009, a French appeals court upheld the Iraqi government’s position.

Interesting enough, Iraqi officials did attempt to sell the yacht last year, too, for a reported $30 million. They were unsuccessful, reportedly believing the global recession was the reason they did not find a buyer. The work in Greece seems to make them feel more confident. A few news reports quote Mehdi Ali, general director of the Iraqi Maritime Company, as saying, “The yacht sailed through the Suez Canal after we finished the required licenses and documents for sailing.” He added that once Basrah Breeze reached the United Arab Emirates, the transportation minister boarded the yacht for her final trip to Basrah, Iraq.