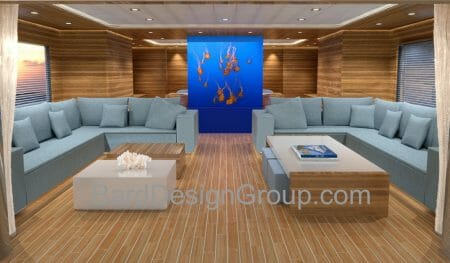 Chrysaora is a genus of jellyfish, something found in abundance in the world’s warmer waters. It’s also the name of a concept project created by Katalin Bard of Bard Design Group. And when you examine the saloon image here, you’ll know why.

Rather than just design the aquarium to take center stage, “I did quite a bit of research on the jellyfish and the living environment they require,” Bard explains. The idea is not out of place: Aquariums of various kinds have been installed aboard megayachts in recent years, with plenty of attention given to the equipment keeping them alive. Along these lines, Bard made sure her design would include proper access panels for the equipment, which will be invisible to anyone looking up close at the aquarium. That’s because it’s hidden beneath opaque, blue-toned, glass-like surfaces on the base of the aquarium. 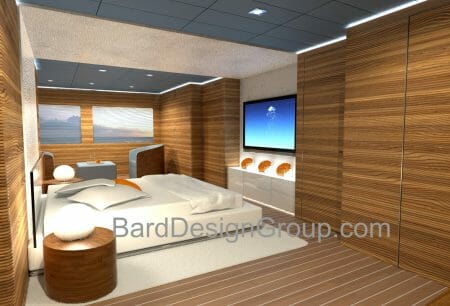 The aquarium isn’t the only feature setting Chrysaora apart from other designs these days. Bard’s goal was to convey the feeling of being at sea even while indoors. (On a related note, she fashioned the overall look to be well suited to Feadship’s SL39 series, at the request of the builder. Of course, Bard points out that the design can be adapted to larger or smaller yachts as well.) Take a good look at the master stateroom image above and the detail image below. The detail image is a close-up of the material used for the master stateroom’s bed canopy. Bard explains that it’s a flexible wall covering with untold numbers of clear glass beads attached to a white base. She chose it for its subtle echoing of bubbles from wave action or other motion in the water. 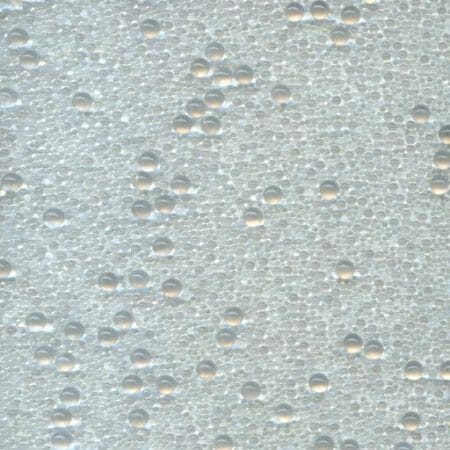 The rest of Chrysaora is highlighted by Japanese elm wall paneling and furnishings, nearly all of which Bard designed herself. Further in reference to the paneling, the wood is laser cut to create three-dimensional, wave-like patterns. There are also teak soles, leather, and luxurious fabrics, as you’d expect. Another nice touch: LEDs embedded in the tables she designed, “an accent of subtle shimmer when desired,” Bard explains.