While some owners continue to step up in size, at least one has decided to step down – before the yacht has even left the drawing board, no less.

That’s among the things I learned straight from Ward Setzer, owner of Setzer Design Group, regarding a version of his VL-56 design. (VL stands for Vision Line, to better reflect more modern, forward-thinking features.) Setzer is working with a Dubai-based client who initially wanted a 65-meter (213-foot) motoryacht but who has now decided a 57-meter (187-foot) VL-56 makes a bit more sense. The illustrations you see here show what Naranja, as she’ll be christened, will look like. She’s intended to meet both Lloyds and MCA regulations.

So why did this gentleman, who owns multiple yachts and sportfishing boats, decide to scale back? “Upon presentation of the original designs and a review of spaces, heights, and features, the owner wanted a lower-to-the-waterline vessel with more interaction with the sea,” Setzer tells me. This explains why the superstructure of the five-deck yacht is not as high as that of similar-size vessels. It also explains why the four main-deck guest suites are actually a bit below the rest of the deck. They, along with their balconies, are exactly one meter (about three feet) lower than the saloon and the side decks that flow aft of here. 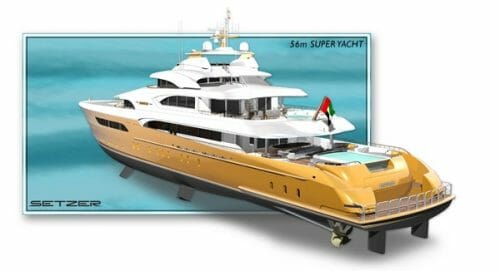 This lower location ties in to something else that the owner wanted, that being “unique architectural spaces,” Setzer says. Due to his extensive cruising experience, the owner has specific layout likes and dislikes. One thing Setzer successfully proposed is the two-deck master suite. Positioned above the main deck, it includes a bedroom separate from a private saloon and a private sundeck. The latter naturally features a hot tub, nestled into the aftmost end. Other noteworthy features contained within the 10.6-meter (35-foot) beam: two galleys; two tender garages toward the bow, with a helipad above them; a spa; and an infinity pool aft on the main deck. For easier boarding/disembarking of guests from the tenders, the transom transforms into a cabana-like area, complete with dockage doors. And because the owner plans to entertain large numbers, five additional guest staterooms are in the traditional below-decks location, along with crew accommodations for 15. These include individual staterooms for a pilot and an engineer. The fact that Setzer saw fit to include a private pilot’s cabin is smart; most superyacht designs focus solely on permanent personnel.

As to performance, the steel-hulled yacht is spec’d for twin Caterpillar 3516C diesels. Setzer anticipates an 18½-knot top speed at the 720-ton half load, with 12½ knots being most economical. The good turn of speed comes from a variation on a full-displacement hull form. Setzer says it’s “almost that of a semi-displacement,” with a spray knocker above the waterline that spans two-thirds of the hull, plus a bow knuckle above that. Why both? Because the owner desired “to have the vessel not look and perform like a typical full-displacement vessel,” Setzer explains. Related to that, Naranja has a draft of 2.7 meters (nearly nine feet), but Setzer says the keel is still deep enough to provide comfort at sea. The 32,000-gallon fuel capacity should be plenty enough for those voyages.

Setzer says bid packages have gone out to some shipyards already. He also says that Naranja’s plans may evolve as he and the owner further refine the details, though he expects the combination of light-tone fabrics and rich woods inside to remain unchanged.