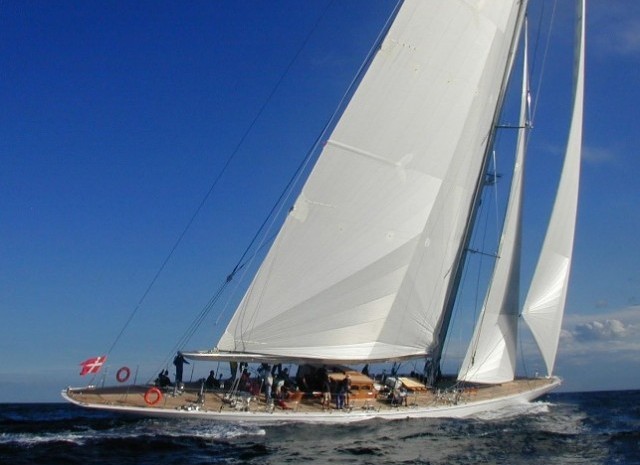 The site of the 1937 America’s Cup race will once again see some of the most famous J-Class yachts—this time private superyachts, both restored originals and replicas—race against each other.

From June 15 to 19 in Newport, Rhode Island, Ranger (pictured), Velsheda, and Shamrock V will race against one another in a five-match series. The event will be the first in the J-Class Global calendar, which is comprised of four races that will culminate with a regatta in July 2012 at the Isle of Wight. As important as Newport is to the history of the Cup, the Isle of Wight is as well: It was where the very first America’s Cup race, then called the Hundred Guinea Cup, took place.

The race isn’t just for bragging rights: A prize, the Yachting Cup, will be awarded after the five matches, and points will be awarded for the Global Challenge Trophy to be given at the Isle of Wight race.

Out of all the yachts created over the past century, perhaps none have become as famous as the J-Class models. The Class emerged after the creation of the Universal Rule in 1930. This governed the size and displacement of America’s Cup racers, allowing waterline length to be increased without sail area being restricted, as it had been under the International Rule. Only 10 yachts were built to the specifications, but boy, did they turn heads. They lacked bowsprits, a surprise for the time; boasted big, beautiful rigs; and, most important, performed spectacularly.

While six of those Js were unfortunately scrapped during World War II, the ones that were restored, of which Velsheda is a prime example, helped spur interest in preserving the history of the J-Class. This interest led to the formation of the J-Class Association in 2000. David Pitman, class secretary of the Association, was also the first captain of Velsheda when she was restored. To say he has some knowledge about the various J-Class yachts and how they perform is an understatement. In fact, during the formal announcement of the Newport regatta (in Newport, of course) last evening, he quipped, “We know them as racing submarines,” due to their propensity to get their crews wet. If there were any doubt, several members of Velsheda’s and Ranger’s crews who were present laughed in agreement.

Even though Pitman no longer takes the helm of Velsheda, he still enjoys the friendly rivalry between that yacht and Ranger, which have raced against one another in a few previous events. In fact, during the announcement, when he showed a photo of Ranger after several images of Velsheda, one of Ranger’s crewmembers shouted out, “Finally, a good-looking J!”

Rivalries aside, the race should prove to be a big draw, given how these yachts have finished literally within seconds of each other in previous races. Sail Newport, a local organization focused on teaching kids how to sail, and the J-Class Association will manage the on-water race. Viewing stands will be at Fort Adams, and other good locations to see the action include Castle Hill Inn and a handful of places in Jamestown. Global sponsors have already signed on as well, including Claasen Jachtbouw, which delivered the replica of Lionheart last year; HJB, which is building the replica of Rainbow; and Royal Huisman, which built Hanuman (a replica of Endeavour II) in 2009.

This won’t be the last J-Class regatta to be held in Newport. The organizers already have plans for another event in 2014, which may attract all 10 of the originals and replicas in existence and under construction.