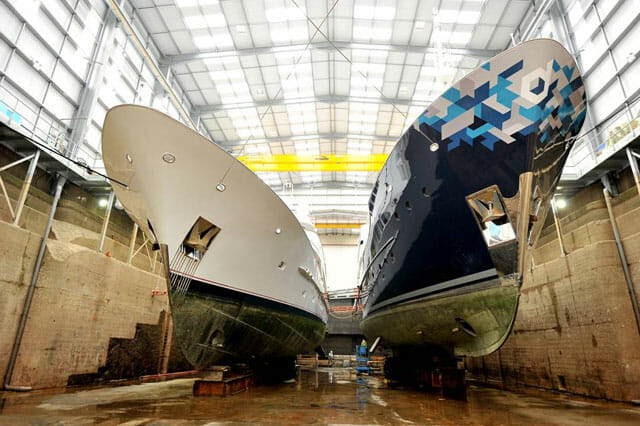 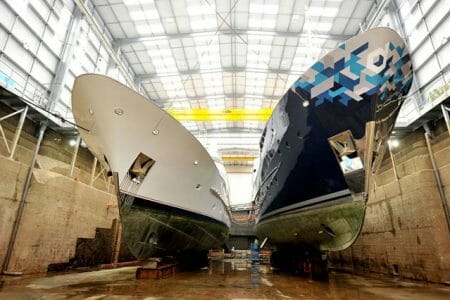 In what is hopefully a sign of some economic recovery, by the end of this month, Pendennis will have eight megayachts—both sailing yachts and motoryachts—in its sheds, the majority of which are in for refit work. It marks one of the British yard’s busiest winter periods ever.

The sailing yachts Adela and Andromeda La Dea, the former built by Pendennis and the latter by Perini Navi, each pulled into the shipyard at the end of last year. They’ll both remain at Pendennis through the springtime. This marks the third time that Pendennis was chosen to work on Adela. As for Andromeda la Dea, it may be hard to imagine, but she’s in for her 20-year ABS survey inspection, plus to have a full repaint and some teak decking replaced. Her captain, Mac Auwer, has previous experience with Pendennis, having overseen a refit there a few years ago for the sailing yacht Enterprise.

Other recent arrivals include the motoryachts Audacia and Dardanella, pictured above inside Pendennis’ covered and climate-controlled outer dock. They, too, will be on site through the spring, likely the end of April. The 46.5-meter (153-foot) Audacia will emerge in time to head over to the Cannes film festival with underwater lighting and a two-meter (about 6’4″) transom extension to improve the “beach deck,” plus the installation of Quantum ZeroSpeed stabilizers. The 36.88-meter (121-foot) Dardanella is undergoing a bit more work. The ship’s office is being  reconfigured, and a wet room is being created on the bridge deck for more flexible pilot accommodations. Fun features are being added, too: a hot tub on the sundeck and a steam shower in the owner’s suite. Yet another change: An insulated screen enclosure for the aft deck, for when Dardanella is cruising in higher latitudes.

Any day now, a fifth yacht will arrive for work, an unnamed Feadship measuring 42 meters (138 feet). Pendennis isn’t permitted to release specifics on the work to be performed, simply stating that it will be “substantial.”

All of these are in addition to three new-build sailing superyachts that are wrapping up construction. There’s Christopher, the 46-meter (151-footer) cruising ketch designed by Ron Holland, which should be en route to St. Barts within the next few days to participate in the annual St. Barths Bucket Regatta. Then there’s Akalam, a 32-meter (105-foot) sloop designed by Barracuda Yacht Design that is expected for hand-over in the next few weeks. Finally, there’s Hemisphere, a catamaran originally started at Derecktor Shipyards but brought to Pendennis last year. She’ll be completed by summertime. Measuring 44 meters (145 feet), Hemisphere is the largest of her kind in the world.