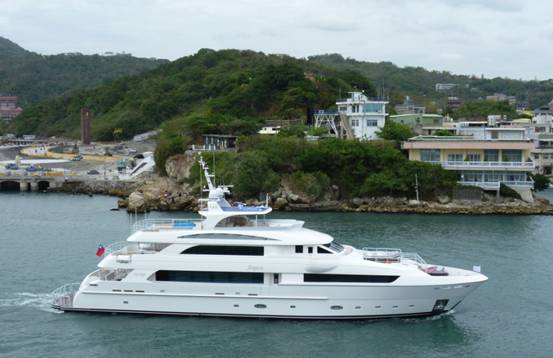 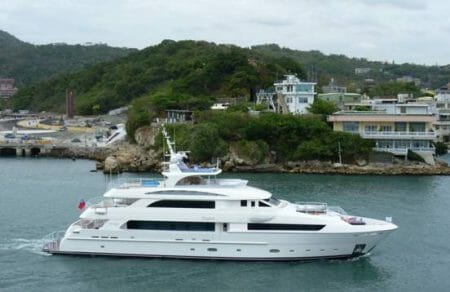 About two weeks from today, the fifth P130 built by Horizon Yachts will arrive in Malta, for her owners’ maiden cruise.

Christened Angara, the 136-foot (about 41.5-meter) yacht departed the yard in Taiwan earlier this month. She has accommodations for 10 in the owner’s party plus six crewmembers and a captain. Since the P130 series, with styling and interior design by Espinosa, offers buyers flexible general accommodations, Angara’s owners took advantage. They opted for a traditional layout, with a main-deck master stateroom and all four guest staterooms on the lower deck. The dining area flows directly off the saloon, though it is delineated by a stone sole, as you can see in the photo below. The owners also requested the captain’s cabin be located on the upper deck, close to the wheelhouse. By comparison, the buyers of the first P130, christened Miss Rose and delivered in 2008, requested two master staterooms. One is aft on the upper deck, with the other forward on the main deck. 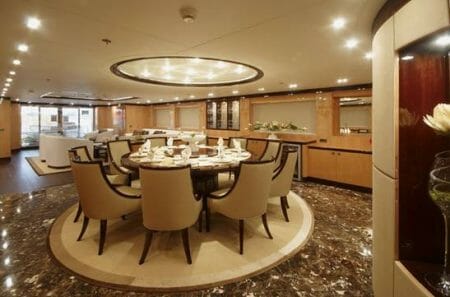 One thing that doesn’t change from contract to contract within the P130 series is the engineering. Each yacht is built to DNV HSLC classification and in compliance with the MCA Code. (“HSLC” stands for High Speed Light Craft.) Horizon’s construction practices are among the reasons why Horizon became the first Superyacht Builders Association (SYBAss) member from Asia. According to Horizon, Angara’s sea trials confirmed a 16.5-knot top speed under full load in open sea conditions. Power comes courtesy of twin 1,800-hp Caterpillar C32A engines. The yard adds that at a 12-knot speed, with both gensets running, Angara is quite fuel efficient, consuming less than 230 liters (about 61 gallons) per hour.

Angara will remain in the Med for the duration of the summer.