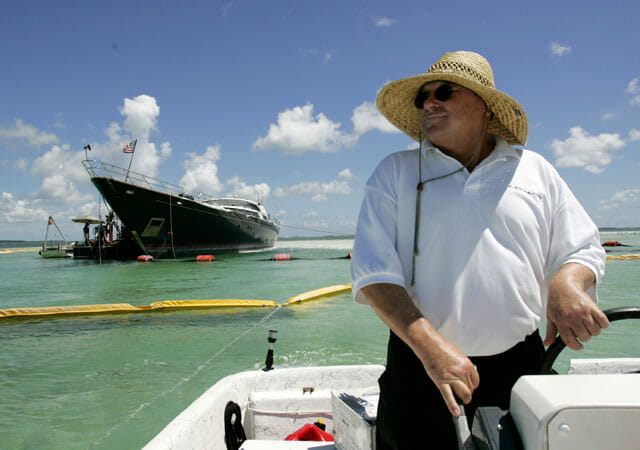 By early June, the long legal battle over the salvage of Legacy after Hurricane Wilma in 2005 might just finally come to an end.

According to a story in the Key West Citizen, for most of this month, the 158-footer’s owner, Peter Halmos, and two insurance companies have been presenting their cases before a chief U.S. magistrate in Miami. At stake is how much Halmos should be reimbursed for costs to repair the 158-foot (48-meter) Perini Navi, built in 1995.

In case you’re not familiar with the story of Legacy, here’s what happened. Halmos, his captain, and some friends decided to ride out Hurricane Wilma onboard the megayacht. The location they chose, off of Key West, was the same one where they had successfully ridden out Hurricane Katrina several weeks prior. Legacy’s anchor didn’t hold during Wilma, unfortunately, and the storm tossed her around for miles. Legacy finally landed in sand and sea grass off Key West, in a federally protected area. Even though both the National Oceanic and Atmospheric Administration (NOAA) and Halmos agreed that the yacht needed to be removed without further damaging the sea grass, they couldn’t agree on the best procedure, debating for months. Because would-be trespassers kept approaching Legacy, Halmos, his captain, and some crewmembers lived onboard for six months, then moved to houseboats anchored nearby. Halmos (shown above, with the de-masted Legacy still stuck in the background) told the Associated Press in October 2007 that he was spending about $1 million per month maintaining the boats and trying to move Legacy. He added he’d do whatever was necessary to extract her responsibly.

Finally, in February 2008, Legacy was free at last, after several unsuccessful attempts. Specially commissioned equipment displaced the sand in front of her, foot by foot, allowed a towing vessel to begin pulling her forward. The full process took six months. Halmos and the salvage team towed the sailing yacht to Fleming Key in Florida, then to a shipyard in the Bahamas for repair.

Then the legal battles began. Court documents reveal that Halmos sued the Insurance Company of North America and Strickland Marine Insurance for $27 million in damages in October 2008. Sixteen-million dollars of it represented Legacy’s value, with the rest being salvage fees. While the insurers state they have paid $26 million to date, according to the Key West Citizen, Halmos says just $16 million was paid. Furthermore, none of the three parties can agree on conditions tied to some of the money already reimbursed. Further, Halmos wants to recover millions more that he says he spent to extract Legacy from the wildlife refuge. He also says that the estimated repair costs for Legacy are double her build price.

The judge assigned to the case has been attached to it since the initial filing. It has gone on so long because of motion after motion being filed by the various parties. Motions continued to be filed even after all agreed upon a jury trial to begin in May 2010. (The judge was clearly frustrated by the process, given what he wrote in court records in November 2009. Following a motion for Extension of Time to File related to the agreed-upon trial date, he wrote, “the Court is concerned that the parties may want to litigate this case ad infinitum and never have it go to trial. While the parties have already seen the personalized service they receive from this Court, they should not ASSUME from said service that this is the only case before it.”) Despite settlement conferences held by the judge in 2010, ultimately settlement wasn’t reached.