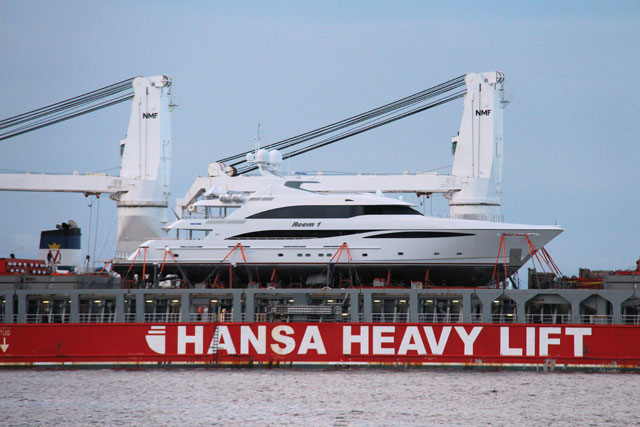 Last month saw the quiet hand-over of T-61 to her owner by Trinity Yachts. Reem 1, as the megayacht is formally known, was transported across the Atlantic as seen here. Reem 1 may be similar in length to previous Trinity projects, but the all-aluminum 166’10” (50.9-meter) yacht stands out for having some noteworthy performance parameters.

Reem.1 is reportedly the first American-built megayacht bearing MTU’s 20V 4000 series engines—specifically, twin 20V 4000 M93L diesels rated at a power-packed 5,765 hp apiece. Thanks to the engine package and a new hull design for Trinity Yachts, Reem 1 reportedly can achieve 32 knots at half load. That’s quite a bit faster than most—if not nearly all—other megayachts of her LOA. Billy Smith, vice president of Trinity Yachts, explains that the shipyard guaranteed the owner 27 knots at full load and that Reem 1 exceeded that by a little more than 2 knots.

Also consider that the ABS-classed Reem 1 is capable of these speeds with traditional propellers, not waterjets, the latter of which are typically associated with swift, large yachts. Further consider that prop-driven yachts enjoy greater range at displacement speeds than waterjet-driven ones.

As for the above-mentioned hull design, Smith says that Trinity’s in-house naval-architecture team made modifications to its existing 50-meter hull design, testing them both in the virtual world and tank tests. Some of the modifications were made to reduce slap at anchor, too. Additional changes were made to the rudder design to lessen drag, and to the underwater exhausts.

While Reem 1 features interior-design contributions by Karen Lynn Interiors, the owner has requested that images and detailed descriptions of the eight-guest-stateroom layout be kept confidential.