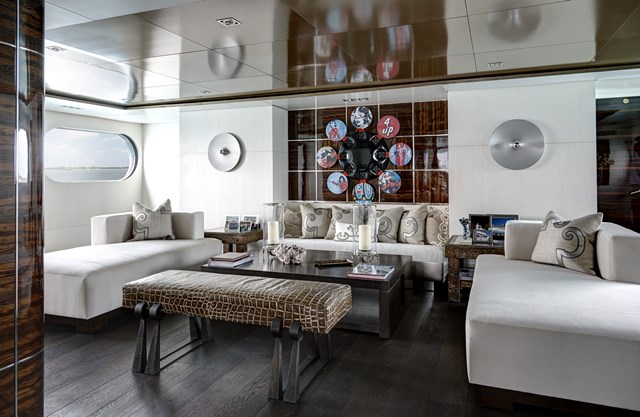 Back in 1986, when Feadship delivered The Highlander to the late Malcolm Forbes, she was the ultimate corporate tool. Business meeting after business meeting was held onboard through the 2000s. The 151-footer (46-meter) entertained numerous celebrities and world dignitaries, too. As a result, she had multiple receiving areas, Today, rechristened Highlander after a lengthy refit, this Feadship is available to charter guests for the first time. 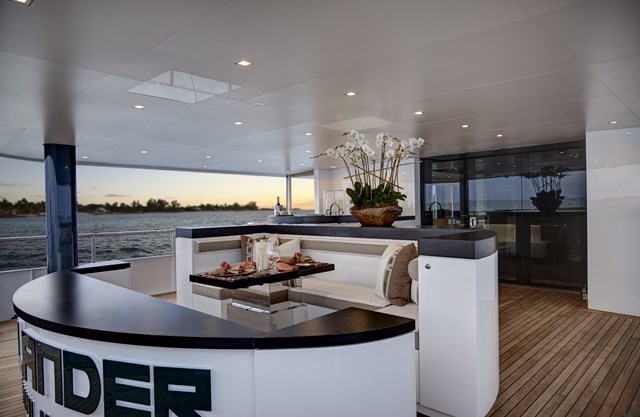 Given Highlander’s history and pedigree—she was also famously designed by the late Jon Bannenberg—it’s not hard to see why the current owners, Roberto and Joanne de Guardiola, were attracted to her. He an investment banker, and she an interior designer, the de Guardiolas are also active cruisers. They acquired the yacht in 2012 from the Forbes family, and had Derecktor Florida http://www.derecktor.com start refitting her later that year. The 18-month refit included a lengthening to a little more than 162 feet (46.45 meters) without losing Bannenberg’s distinctive exterior design elements. (“Owning a Bannenberg is like owning a house by Mies van der Rohe—it’s too much to resist,” Joanne de Guardiola tells Architectural Digest.) It also involved the creation of an entirely new transom and aft deck. Corporate and political types in Forbes’ day didn’t go swimming while onboard. Highlander now is much more suitable for similar activities. The swim platform raises and lowers hydraulically, for guets’ ease. The famed Feadship is also more suitable for alfresco dining at anchor or dockside, as this photo shows. 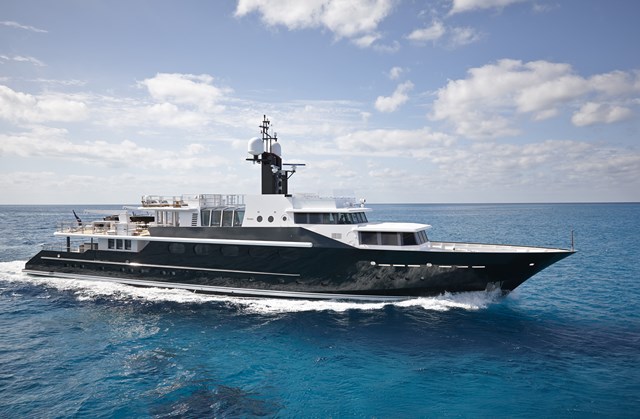 While Highlander in profile looks much like she did all those years ago, inside it’s an entirely different story. The de Guardiolas had essentially every square inch reconfigured and re-adorned with contemporary elements. In the full-beam main saloon (at top), for example, Highlander has oak soles, walnut wall paneling, leather seating, and eye-catching artwork. Mixed media, photos, and portraits hang throughout the open space, only part of which is visible here. There are further virtual slabs of granite serving as stair treads leading to the upper deck.

This newly created media room underscores the more modern appeal of Highlander. It’s situated fully aft inside on the main deck, with multiple seating and gathering options. (On a related note, the chaise lounge here is vintage. Joanne de Guardiola personally selected new and vintage furnishings to set different moods throughout Highlander.) Since the saloon is just forward, formal dining isn’t on this deck. Instead, it’s up one level, with Plexiglas-fitted windscreens that can slide open. 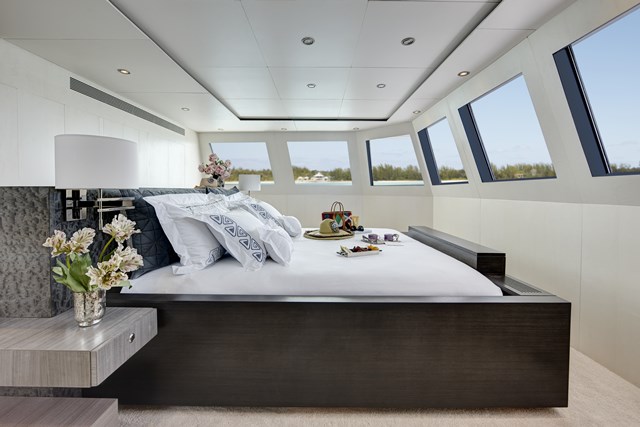 In keeping with modern megayachts, Highlander positions the master stateroom forward on the main deck. Bleached anigre keeps the atmosphere light. Five staterooms for guests are all below decks. Each contains embroidered bed linens similar to the ones here, all of which Joanne de Guardiola designed. 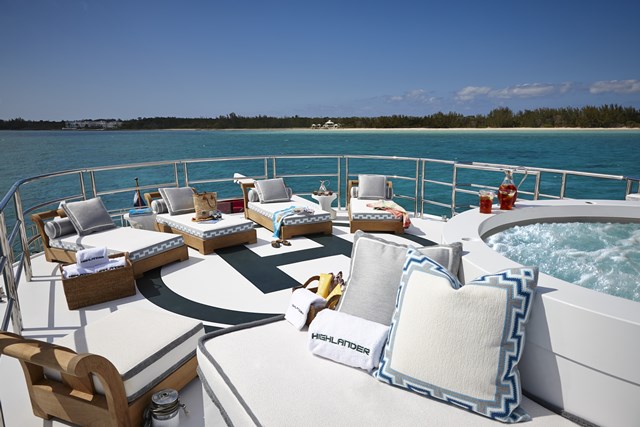 Highlander wouldn’t be complete without sunning and soaking spaces. The sundeck offers a hot tub and loose lounges. Should guests need to arrive or depart via helicopter, the deck gets cleared of furnishings.

Of course, no charter yacht is complete without watertoys, either. The de Guardiolas acquired a Cigarette speedboat custom-built for Forbes. There’s further a Donzi speedboat for guests to enjoy, along with snorkeling gear, kayaks, and more.

Highlander has other visually dazzling spaces, including the blue-onyx-soled skylounge and a wine “cellar.” She’s available for charter via the central listing of Edmiston. http://www.edmiston.com Her rate is £160,000 per week (about $274,300 as of press time) this summer in the Med. Come winter, Highlander heads to the Caribbean. The currency and rate both switch: $210,000 per week.

UPDATE, JULY 22, 2014: Derecktor Florida has shared a note of thanks from Roberto de Guardiola:

This project’s magnitude easily surpassed our expectations when we started and Joanne and I are truly amazed at the complexity and thoroughness of what has been accomplished.

While at the end of any project, there are always many “parents,” the truth is that this refit could not have been accomplished by us at any other yard. During all the time we have been at the yard, we have always found a complete “can do” attitude and at all times have had complete trust that we were being treated fairly and candidly both for the items we initially agreed as well as for all the additional work which was required as we began to dismantle Highlander.

Our new vessel is a true testament to what can be accomplished when all parties trust and work with each other. We are extremely grateful for the cooperation and guidance we received from Ken Imondi and for Jack Schneider’s day-to-day supervision. At all times, I felt that I could freely call you to discuss any issues that would arise. The final product is one that all can be rightfully proud of and we hope to maintain a long relationship with Derecktor.