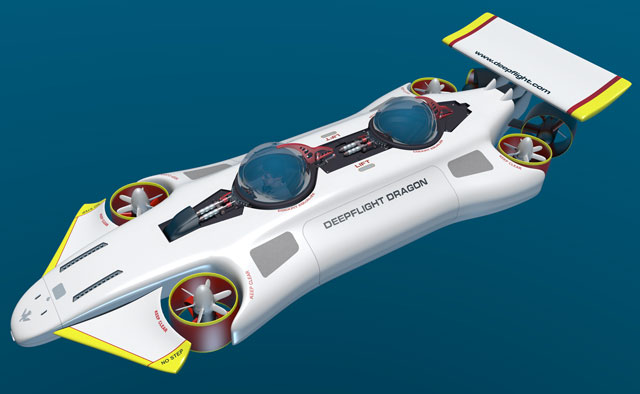 A number of personal submarine manufacturers target the megayacht market. One, DeepFlight, whose roots are in the commercial and scientific fields, has a new sub compact and lightweight enough that it can slip in and out of your tender garage as is. It’s the DeepFlight Dragon, which is further meant to let you take the controls.

The DeepFlight Dragon weights 3,968 pounds (about 1,800 kilograms), stands 4’9” (1.5 meters) tall, and is 15’7” (4.8 meters) long. The company says the weight is less than half of that of competitors’ offerings. The size is advantageous, too. Other personal subs currently available either sit on a reinforced platform or require a custom garage. The DeepFlight Dragon’s width of 6’8” (2.1 meters) means it won’t pose a problem for your yacht’s beam, either.

The DeepFlight Dragon operates on the principle of positive buoyancy. This means it automatically floats atop the water unless ballast is added, or in this case, diving thrust is engaged. Specifically, two fore and two aft vertical thrusters allow the DeepFlight Dragon to explore 394 feet (120 meters) below the surface. This is deep enough so that natural light still filters down, and therefore eliminates the need for headlights, which can disturb sea life unaccustomed to the brightness. Those same electric thrusters permit the craft to hover, too. If the shape of the sub reminds you of a plane, well, it should; the idea is that you are essentially flying, though at low speeds, underwater.

The DeepFlight Dragon seats two people and is targeted to owners who revel at doing the driving (and diving) themselves. As Graham Hawkes, the company’s founder and CEO, puts it, “No one buys a sports car and then gives the keys to a chauffeur.” DeepFlight’s team says training in proper operations takes about half an hour to an hour. The time is so brief because the sub has a power monitoring and management system. The DeepFlight Dive Manager checks things like battery power and oxygen levels. If something is too low, the DeepFlight Dragon will automatically resurface.

DeepFlight can customize your craft with cameras, sonars, and even a paint scheme to match or complement your megayacht. Price: $1.5 million. If you order, you’ll join the ranks of DeepFlight clients like Sir Richard Branson and former Maltese Falcon owner Tom Perkins, among others. In fact, the video below is of another DeepFlight model, the SuperFalcon, which both Branson and Perkins commissioned.