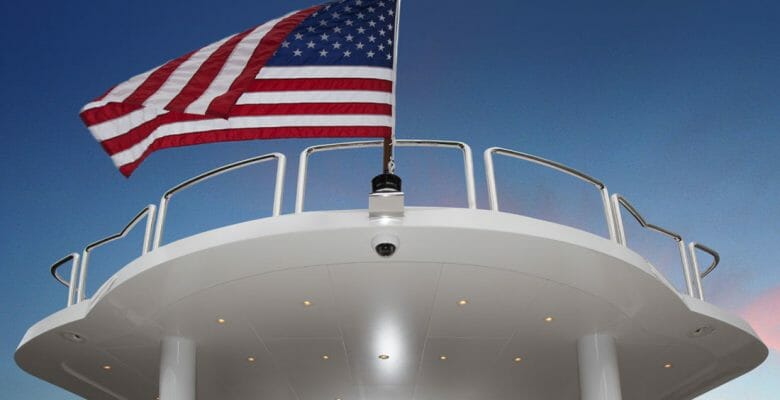 After several years of petitioning by the U.S. Superyacht Association (USSA), U.S. flag regulations are closer to getting their first update since they were written in 1920. There’s now Congressional support for the Coast Guard to develop rules for megayachts exceeding 300 gross tons, the current limit.

No one knows exactly why the regulations have remained unchanged all this time. The USSA believes that the subject was never raised. Regardless, in the early 20th century, yachts overwhelmingly were well below the 300-gross-ton mark. Times have changed, of course, with many megayachts displacing closer to 500 gross tons. But, the tonnage cap means many Americans seek other flags for registration. The flags are of countries where there’s either a higher tonnage limit or no limit. With the USSA estimating that Americans own 40 to 50 percent of the large-yacht fleet, itself totaling around 5,000, it’s a significant number.

To be clear, American-owned megayachts exceeding 300 gross tons can fly the U.S. flag. However, they can do so only registered as commercial vessels, not recreational ones. This in turn comes with a compliance checklist not written nor intended for pleasure craft. It’s among the issues that the USSA has been raising with Congress and the Coast Guard.

Thankfully, there’s relatively recent precedent for letting these large megayachts be registered recreationally. It comes in the form of the 498-gross-ton megayacht Freedom. When her current owner, an American, acquired her in 2012, he was determined to have her registered under the U.S. flag as a recreational vessel. It took 14 months of mounds of paperwork, plus countless calls and emails to the Coast Guard, but it worked. In short, the Coast Guard accepted a rule under ABS guidelines as an equivalency.

This precedent-setting step helped the USSA step up its Congressional meetings last year. The USSA also sent a letter to the Coast Guard in December 2014 to lay the groundwork for raising tonnage limits. The efforts took a major step forward earlier this month when two members of Congress jointly sent a letter to a key Coast Guard official. Specifically, Reps. Candice S. Miller of Michigan and Patrick Murphy of Florida wrote to Rear Admiral Paul F. Thomas, the assistant commandant for prevention policy for the U.S. Coast Guard. Vessel documentation is among the many programs under his charge. The Representatives urged Thomas to modernize yacht-specific rules.

The letter, obtained by MegayachtNews.com, reads in part:

As you know, currently the upper limit to register as a recreational vessel under the U.S. flag is 300 gross tons by regulation. This, in turn, limits the economic impact of this sector of boating and results in a dampening effect on the overall U.S. economy. We believe the time has come to develop a comprehensive regulatory regime to address this vessel category to facilitate more U.S. flag recreational vessels of a larger tonnage operating within U.S. waters.

We, therefore, request that the Coast Guard undertake an initiative to facilitate the flagging of large recreational vessels under the U.S. flag to increase the number operating in U.S. waters. Perhaps establishing a working group of those knowledgeable in these matters may facilitate this effort. If statutory impediments arise during this, we understand that you would need to seek legislation to provide any necessary additional authority.

So, what’s the next step? The USSA says it’s up to the Coast Guard to work on the policy. The yachting group remains in touch with the agency and plans to follow up in the coming months. If the agency decides it cannot, or will not, then the USSA is prepared to return to Congress to ask for legislative support. That would require a Congressional representative putting forth a bill for a vote, and a two-thirds majority to have it pass.

We will provide an update on the policy as news becomes available.