Home / Yachts / Motoryachts / Do It Now Does It for Her Owner, and Horizon 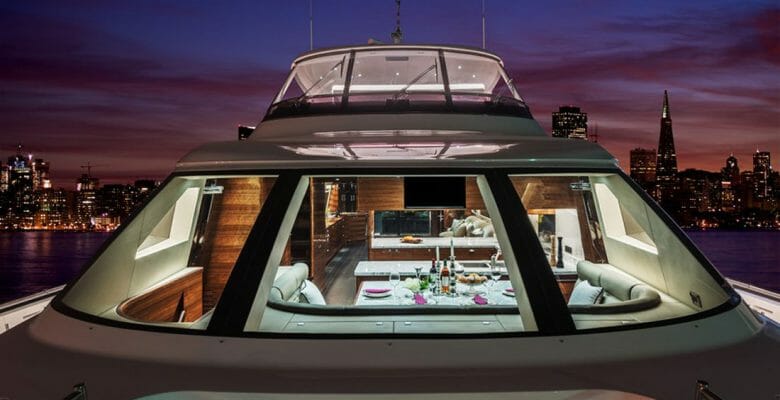 Her nameboard should be the official mantra of yacht owners everywhere. Do It Now is receiving her finishing touches at Horizon in preparation for her global premiere in the United States in March.

Like a number of Horizon clients, the owner of Do It Now is a repeat customer. Her previous yacht was a Horizon 76, bearing the same name. The new yacht is hull number one of the Horizon E98 series. Also like other clients, the owner took advantage of the semi-custom nature of the series. The E98 comes with a choice of a skylounge or open bridge. She opted for the latter. She also opted for zip-in EZ2CY side panels that, with the fixed windshield, let the bridge be air conditioned. 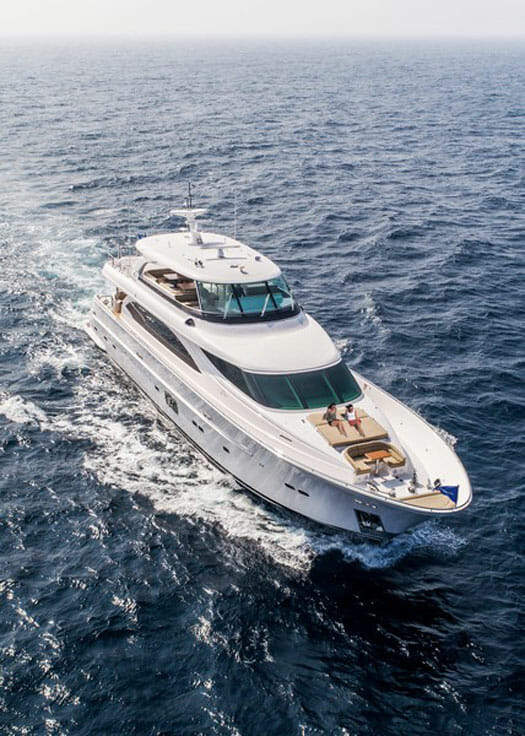 That should make afternoons and evenings on deck all the more enjoyable. Do It Now invites guests to linger up here, due to a five-seater bar designed entirely around the owner’s wishes.  There’s also a good-size dining area and space for loose lounges. The crew can cook up a storm on the barbecue and keep drinks cold from an adjacent ice box.

Similar to many American-owned megayachts, Do It Now has a country kitchen on the main deck. But, there’s no formal dining area just aft. Instead, the owner wanted a much larger saloon. Conversations—and food—can flow from one to the other, however, due to a pass-through between the saloon and country kitchen.

High-gloss walnut paneling characterizes the above-deck decor onboard, while satin-finished walnut lines the walls of the staterooms below. Four staterooms sit below decks, including the master. Neutral-toned stonework complements the woods throughout. In addition, Do It Now’s owner had the crew’s quarters outfitted in satin-finished white oak.

Do It Now should see a cruising speed of 19 knots and 1,250-nautical-mile range at 10 knots. That’s plenty to enjoy a variety of shallow-water regions like the Bahamas. Horizon keeps draft for the E98 at just shy of six feet (1.83 meters).

You can see Do It Now for yourself at the Palm Beach International Boat Show in March.