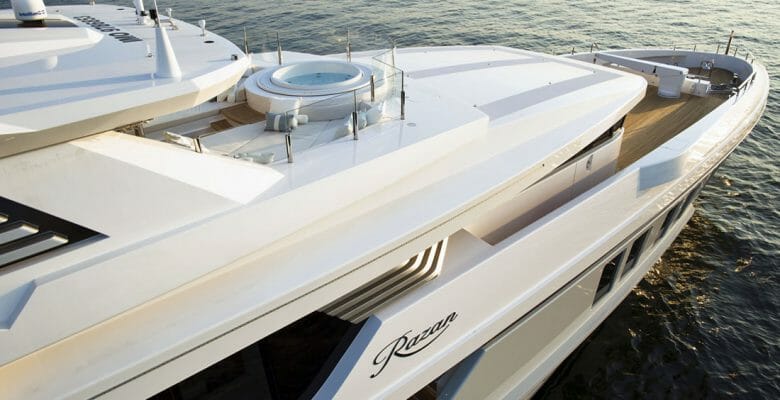 Now in her owner’s hands, Razan is the first delivery stemming from a new semi-custom strategy for Turquoise Yachts. What’s more, that strategy still allowed her owner to nearly start from scratch.

The 154-footer (47-meter) began on paper as a spec project, with styling and interior design by H2 Yacht Design. She’s one of several sizes and configurations embracing the approach. As Mehmet Karabeyoglu, CEO of Turquoise Yachts, told us in 2015, “we anticipate starting the projects with bespoke designs and reducing delivery time. Our infrastructure has the capacity of continuing work on several yachts and keeping stock hulls.” This particular size and design caught the attention of a buyer. However, as much as he liked some things, he wanted some different things, too. Therefore, “we didn’t use any of the existing drawings,” Karabeyoglu explains.

Among the changes aboard Razan: the beach club (below). Rather than be an intimate space, it extends deep. Also, rather than be either a lounge or gym, it serves both purposes. It additionally has a dive center, and the swim platform is longer than originally penned. Interestingly, the concept suits Turquoise’s original idea for the project, that being offering super-size superyacht amenities in smaller packages. But, the owner of Razan took it further. 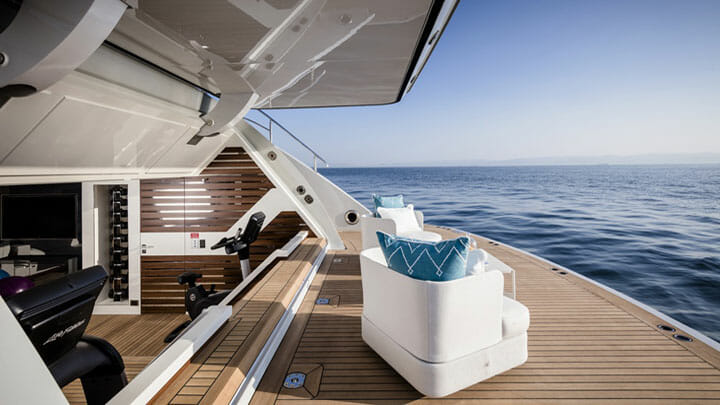 Yet another example of taking it further: the foredeck. The initial design included watertoy stowage here. Razan still has the guest tender and PWCs here. But, the guest boat is bigger, plus the owner wanted a seating area for family and friends.

Speaking of family and friends, the owner plans to take along guests representing multiple age groups. And, multiple people are coming aboard, too. Therefore, five guest staterooms accommodate them. Megayachts of Razan’s LOA usually have four cabins instead. The extra accommodation sits on the upper deck. What’s more, all five staterooms have Pullmans.

With formal dining taking place in the upper saloon as well, Razan rethinks how a popular size can be put to better use. Boat-show goers will get their first looks at her at the Cannes Yachting Festival, then the Monaco Yacht Show and Fort Lauderdale show. Our gallery below gives you a sense of what to expect.