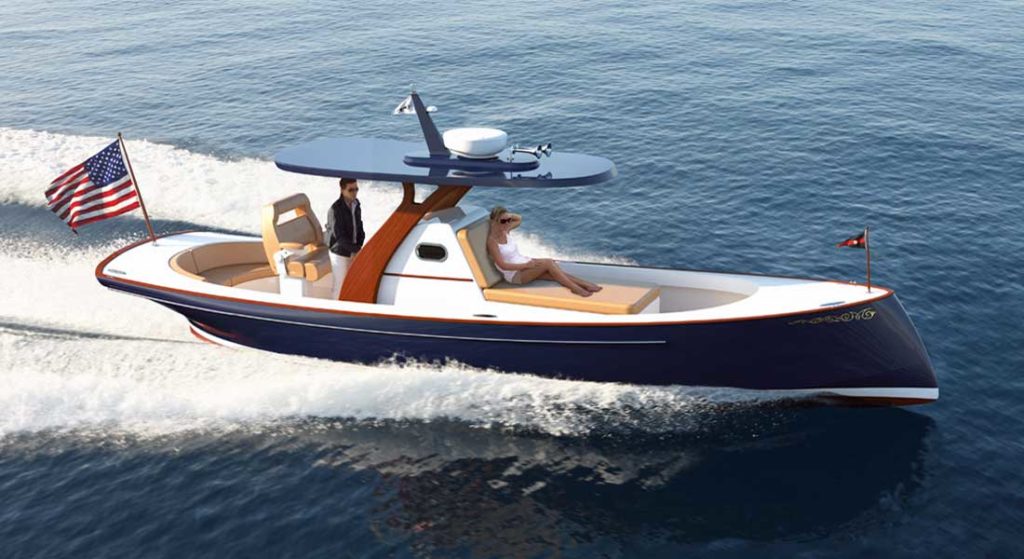 Wooden boat fans surely know Moores Marine and its founder and president, James Moores. The North Carolina yard is world-renowned for restoring classic wooden yachts of all shapes and sizes, exceeding 100 projects over about 30 years. Moores personally blogs about the goings-on at the yard, too, and his passion is palpable. That passion is even more palpable for his newest venture, Moores Yachts, and its M30. A year in the making, she marries the best of the old and the new. The M30 brings together cold-molded construction, some early-20th-century design flair, and thoroughly modern performance, upwards of 43 knots.

Featuring a folding hardtop, particularly helpful for garages, the M30 can additionally be tailored for tender usage. For instance, Moores Yachts will install lifting eyes, and of course paint her to match her mothership. The yard will further cover seating areas how you wish.

You can relax on that seating knowing a lot of planning went into engineering and performance. Moores says that the M30 is for an owner “who wants a civilized little yacht but wants it to perform as well.” He turned to B&B Yacht Designs, a fellow North Carolina company, for her hull. He asserts that she accelerates smoothly to exceed 50 mph, plus handles like a sports car. Furthermore, he adds, she achieves turns in half her length.

Above the waterline, the M30 harkens to earlier times. The ducktail (stern sponson) recalls designs by John H. Wells, for instance. Wells was the famed naval architect behind equally famous commuters by Defoe Boat and Motor Works, Consolidated Shipbuilding, and more. “Marrying design with performance without sacrificing either is what Wells and his peers did so well,” Moores asserts. “Let me tell you, that is no small feat.” The transom itself, meanwhile, echoes Hereshoff designs, while the bow comes straight from World War I battleships.

“The M30 is so much more than I had dreamed,” Moores confesses. “When she goes across the harbor, I want the world around her to stand still. That is a true yacht in my book.”

Hull number one starts construction in January at Moores Marine. Several can be underway at once, too.