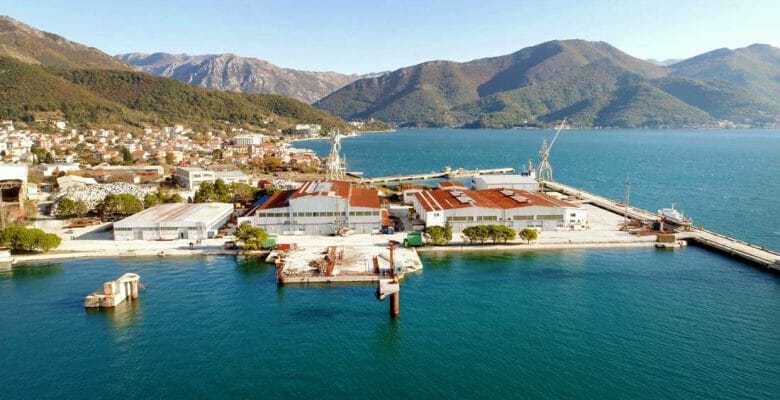 UPDATE, NOVEMBER 3, 2020: The former Bijela shipyard is in the hands of a new redevelopment team. Group Adriatic Marinas and Damen have agreed to part ways. Drydocks World – Dubai is taking up the project in place of Damen. Following remediation by the government, the yard should take 36 months to complete as a superyacht refit facility.

A year from now, a commercial shipyard in Montenegro may reopen as a superyacht refit yard. Though works would be preliminary, the site formerly known as the Bijela shipyard will operate under the guidance of Group Adriatic Marinas, parent company of Porto Montenegro, and the Dutch company Damen, parent company of Amels. The two received a 30-year concession from Montenegro’s government last month.

The Bijela shipyard (above), formally Adriatic Shipyard Bijela, sits on Boka Bay, a.k.a. the Bay of Kotor. That same body of water is home to Porto Montenegro. The latter has 450 berths, as well as hundreds of apartments, a hotel, shops, and restaurants. According to Damen, its management team and Adriatic Marinas have been in discussions over the Bijela shipyard for the past six years. In fact, in January 2016, the Montenegrin government disclosed that the two had bid jointly for the shipyard concession. This past January, the government revealed that final discussions were underway. The parties signed the formal concession on November 30.

Bijela shipyard is reportedly the largest ship-repair facility in the Southern Adriatic Sea. Featuring two floating docks, the facility covers more than 1.3 million square feet (120,000 square meters). Unfortunately, the yard, dating to 1927, has not been active for some time. Therefore, a good deal of work will go toward transforming it. “Considering the yard’s current condition, we face a challenging period,” admits Rene Berkvens, Damen’s CEO. For instance, remediation, which already has approval to begin, will take place through early 2020. Both Damen and Adriatic Marinas anticipate it taking another year after that to open the site as a superyacht refit yard. At that point, all-new lifting and repair equipment will exist, too.

Even with this timeline, however, the parties are striving to start operations earlier. For instance, if remediation goes well, initial services could start as early as late 2019. This, the parties state, will depend on the Montenegrin government and its remediation contractor being agreeable.

Ultimately, “we take a long-term view on making yacht maintenance and refit in Montenegro a success,” says Berkvens. “A strong customer base at Porto Montenegro and yacht maintenance and refit skills within the Damen Group will contribute to the success of this venture.” David Margason, managing director of Adriatic Marinas, agrees. “This initiative is an ideal example of how Monenegro’s fast-growing tourism and marine-leisure industry can convert back into the generation of jobs in associated creative and production industries.”