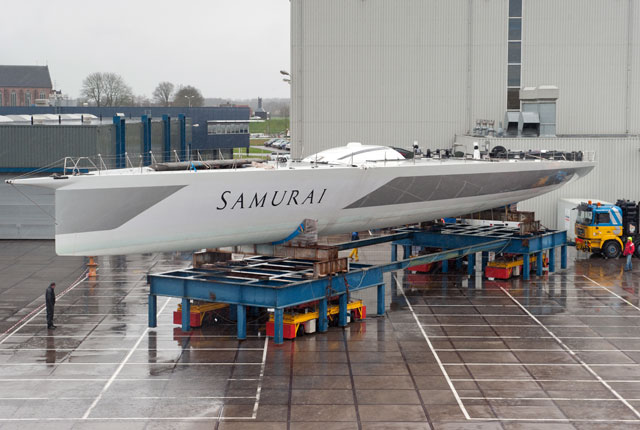 If you don’t recognize Samurai shown here, you probably do know what sailing yacht she used to be. Offshore racing aficionados no doubt do: She was Mari Cha IV, famed for a number of amazing accomplishments. She was designed to be the world’s fastest offshore racing monohull. In 2003, she blew away the competition, and the century-old record, in the West to East Transatlantic race. She also set a record for distance covered in 24 hours. Now in the hands of an experienced yachtsman who enjoys cruising equally as thrilling speeds, Samurai is being refitted at Royal Huisman’s Huisfit division.

The 138-foot (42-meter) Samurai is built entirely of carbon fiber and was quite high-tech for her day. She remains that way today, still capable of more than 40 knots. The owner is keen to have Huisfit preserve her powerful performance. He also understandably wants Samurai to embrace more yacht-like features. She’s gaining an updated suite of electronics and entertainment options, for example. She’s further gaining new high-speed hydraulic winches. They’ll be quite a change from the 21 winches that required two teams to work during races. Huisfit is further replacing the canting keel with a lifting keel. And, like any proper sailing superyacht, Samurai is getting a restyled deckhouse and two cockpits. Rhoades Young Design has penned the new exterior looks. As Mari Cha IV, she was designed by Philippe Briand and Greg Elliot. 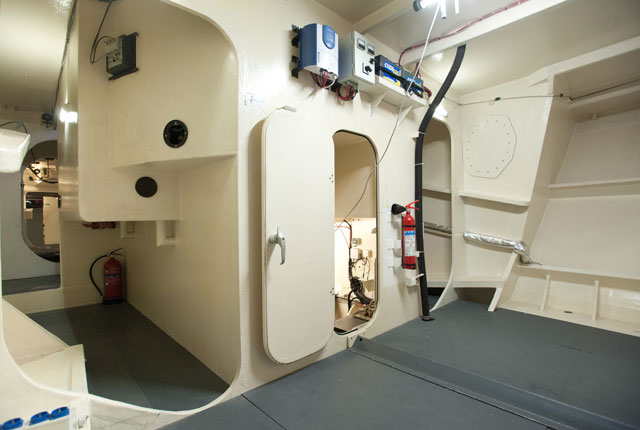 Because Samurai was initially a racing yacht, she had hammocks versus a fully fitted-out interior. Clearly that’s changing, too. Rhoades Young Design is responsible for the general arrangement and decor as well. To preserve her performance, everything being added or amended must be weighed even more carefully than normal. Details aren’t yet available, nor are illustrations. However, the photo here gives you an idea of the blank canvas to be transformed.

Also being transformed: the paint scheme, and the decking, the latter being a faux teak.

It’s interesting to note that Samurai is one of two racing yachts being refitted by Huisfit. The second is a Royal Huisman build named Flyer. The 65-foot (20-meter) ketch won the 1977-78 Whitbread Round the World Race.