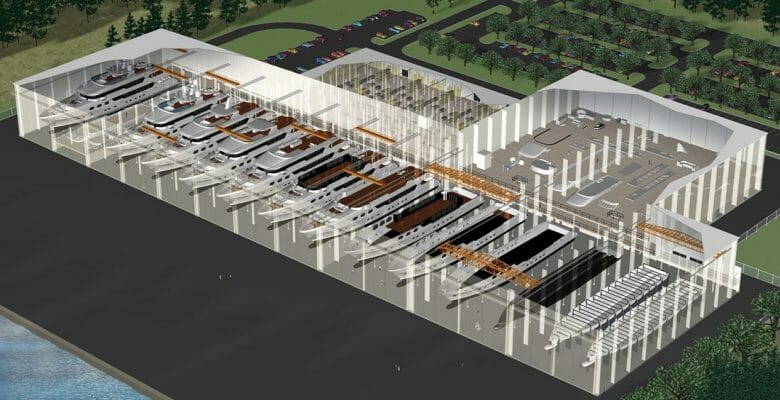 After more than three decades of building megayachts in Washington State, Christensen Shipyards is departing. Starting this summer, all yacht construction will occur in its long-planned, nearly finished Tennessee yard.

Located in Tellico Lake, the facility has 450,000 square feet (41,806 square meters) of manufacturing space. In addition, ti contains 13 construction and finishing bays. Depicted above, it’s more than twice the square footage of the current headquarters in Vancouver, Washington. The Tennessee shipyard started to take shape in the mid-2000s, to complement those headquarters. To that point, the Washington site could only accommodate megayachts up to the 50M Series (164 feet). The new yard, by contrast, was purpose-built for yachts to 225 feet (nearly 69 meters). Christensen suspended construction of it in 2009, though, due to the economic crisis. It requires minimal work to make it fully operational now.

According to Jim Gilbert, president of Christensen Shipyards, the limits in Washington State play a big role in shifting operations. “The current facility is stretched to the max simply building 50-meter vessels, while the market has moved toward larger and larger boats,” Gilbert says. In addition, he says, the Vancouver yard is unable to build yachts exceeding 30-foot (9-meter) beams. Therefore, the Tennessee yard solves the related issues of size and volume.

He continues, “Since the company came out of receivership, we were hoping to keep the existing property for use building 35- to 45-meter vessels.” However, Christensen is not keeping the Vancouver yard. Recently settled lawsuits between the former and current owners of the company involved a deal to end long-term leases on the property. “We believe with the enormous amount of space offered by the new facility, we can still build smaller boats as well as 67-meter yachts, should the demand warrant the effort,” Gilbert says.

Speaking of smaller boats, Christensen still has two yachts under construction in Vancouver. One, hull 38, will launch this spring. The second, hull 42, will see transport to Tennessee for finishing. Both are available for sale. In terms of the first contracts for the Tennessee facility, talks are in progress. “We are currently in negotiations with several clients, including two previous Christensen owners, to contract the first vessels that will become the first start-to-finish yachts to be launched at the new shipyard,” Gilbert explains.

Even though Christensen is leaving Washington, the Vancouver yard will not remain empty. Vigor Industrial, which constructs vessels for the U.S. military, will occupy it following Christensen’s departure. In a press release, Vigor CEO Frank Foti paid tribute to Christensen’s founder, the late Dave Christensen, and the shipyard. “(Dave) stayed responsible to what he built, and his love for the people who built amazing boats here was proven by Dave’s actions many times over,” Foti comments. “There’s a sign in the entry that reads, ‘Through these doors walk the finest boat builders in the world.’ The craftspeople of Vigor intend to honor that vision as we walk through those same doors every day.”