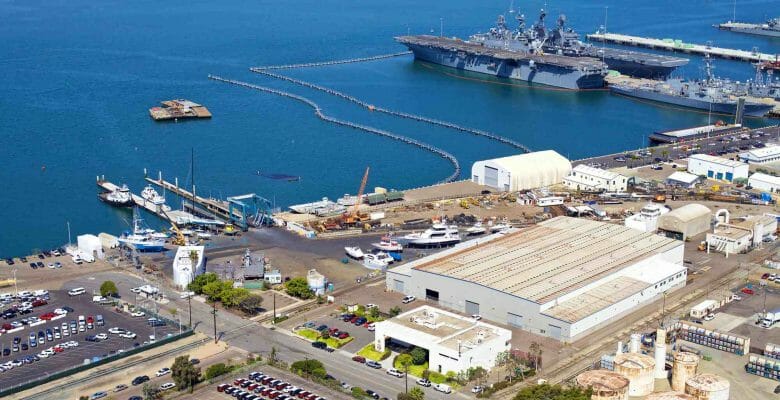 San Diego-based Marine Group Boat Works is turning over one of its facilities on San Diego Bay to a company specializing in government vessel repair. The move consolidates its activities in California to one site, while allowing it to continue addressing superyacht refit and repair needs.

Specifically, the refit and repair firm intends to transfer the lease of its National City, California shipyard to Austal USA. The latter is an Alabama-based subsidiary of an Australian shipbuilder, with special permission to work on U.S. defense programs. Austal USA is also one of the largest shipbuilders in the United States.

The two signed the agreement earlier this month. They expect the deal to close by the middle of next month. They were already familiar with one another, too, since Marine Group Boat Works has a division focused on specialty government craft. Notably, it recently completed construction on 11 aluminum dive boats for the U.S. Navy.

“We are excited for this opportunity to invest in our organization and increase the capacity of our Chula Vista facility to meet growing industry demands,” says Todd Roberts, Marine Group Boat Works’ president. Chula Vista is it second San Diego-area shipyard. (It further has a shipyard in Los Cabos, Mexico.) He notes that the company has seen tremendous growth over the years in its different divisions. For instance, its superyacht services have grown 141 percent since it started offering them about 13 years ago. Besides its yachting and government services, the yard addresses commercial vessels like high-speed ferries, tugs, and barges.

The Chula Vista shipyard certainly has the capacity for yacht, government, and commercial projects. It occupies about one million square feet (92,903 square meters). It further has upwards of 2,000 feet (about 610 meters) of dockage and a 665-ton TraveLift. A machine shop and propeller shop are on site as well.