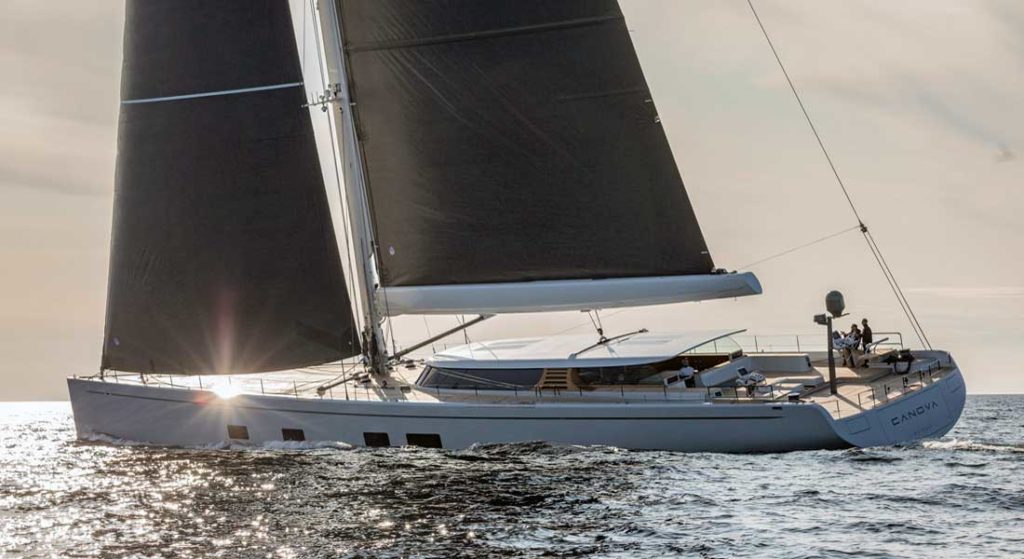 One of the most highly anticipated sailing superyachts from Baltic Yachts, Canova has been conducting sea trials this summer. Through them all, her build and design teams say her sailing prowess, diesel-electric propulsion system, and hydro-generation design are working according to plan.

Announced as the Baltic 142, Canova is the first private vessel of her size to feature a DSS foil. Foils improve both performance as well as comfort. Kenneth Hyfelt, Baltic Yachts’ sales director, was aboard for sea trials in some rough conditions. “The effect of the DSS foil was noticeable and impressive, reducing heel and pitching and making Canova really light on the helm,” he says.

Of course, some tweaking is still going on with systems. Regardless, “preliminary numbers are promising” for the propulsion and generating system. This is according to Kim Kolan, Baltic Yachts’ senior electrical engineer. This includes the glycol cooling system for all electrical converters. It further includes being able to operate in “silent” mode for long periods.

Canova cuts quite the profile in the footage taken during some of her sea trials. Yet to be revealed is her interior. The owner collaborated with Lucio Micheletti for some special touches. In fact, the master suite should be unusual, based on early reports. Not so unusual, though: It sits amidships, for comfort. Four further guest staterooms are aboard the superyacht, as are cabins for eight crew.

Some special touches are outside, too. For instance, the yacht has lifting side windows in her cockpit. They combine with an extended bimini for protection when wanted. Finally, a custom 23-foot (7-meter), 45-knot tender stows beneath the foredeck. It even has refueling tanks, for remote bunkering.

Canova departs Baltic Yachts’ base in Finland this fall.