Eight years after her owners took delivery of her, Cocoa Bean continues to cater to their cruising enjoyment. She promises even more enjoyment, having completed a multi-year, multi-phase refit in Spain.

The owners of Cocoa Bean, a 243-footer (74-meter) from the now-defunct Trinity Yachts in 2012, chose Astilleros de Mallorca to perform all of the refit work. The owners particularly appreciated the shipyard’s track record, plus its ability to suggest tactics. Since some of the wishlist items included changing her structural profile, the owners additionally selected Langan Design Partners to contribute.

For phase one, Cocoa Bean received a handful of new features. They included a new waste-treatment system, plus upgrades to the crew mess. The owners and guests gained a new custom hot tub, too. All of this took place in 2017. An entirely new galley went aboard the following year, stretching into 2019. 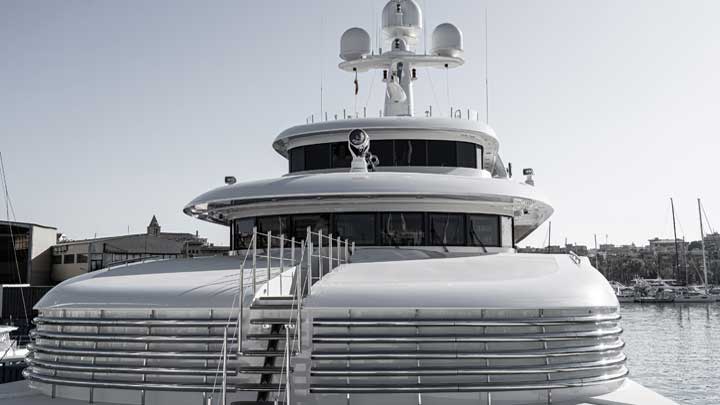 The just-completed phase three focused primarily on styling alterations. Despite her LOA and 39-foot (12-meter) beam, Cocoa Bean has a relatively low profile. The owners liked this, though they wanted to enhance her senses of power and grace. Therefore, Langan Design Partners penned several changes. The megayacht gained new air-grill shapes. The studio also changed the angle and shape of parts of the superstructure supports aft. Additionally, it extended the brows (overhangs) on the two upper decks. The front shape of the main deck changed, too, from a rounded shape to an angular one, with new stainless steel trim as well. Even the mast and flagstaff have different designs.

Notably, structural changes further enhance everyone’s time onboard. For example, the bulwark aft on the main deck is lower, improving sightlines for everyone while they’re seated. Plus, service counters are integrated into the new air plenums aft on the bridge deck. This lets the crew set up buffets tidier, without guests or crew getting in each other’s way, either.

Cocoa Bean is also, of course, showing off a new paint job. While it may be difficult to detect in photos, the superstructure is a different white tone than before, a starker white. She has a new boot stripe, too.