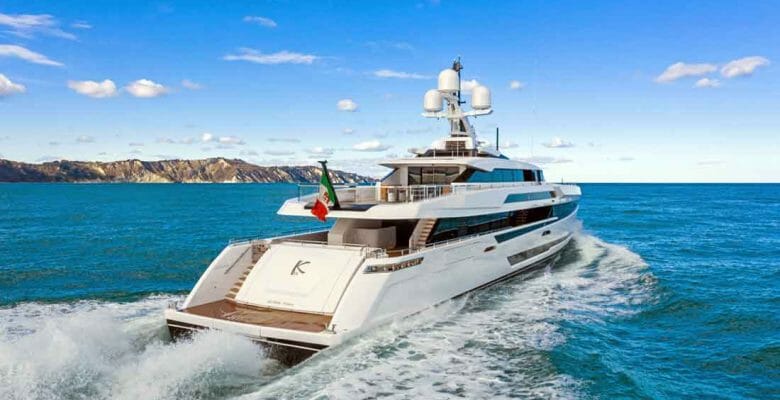 What do the second-highest mountain in the world and a new megayacht from Columbus Yachts have in common? Both are called K2. While the K2 yacht is far smaller than the mountain, she is the larger sister in the Columbus Sport series, which dates back a decade.

Until this point, all of the launches in the series have been Columbus Sport 40M megayachts, measuring 131 feet. They include Divine, a hybrid yacht from 2016. Meanwhile, K2 is the first Columbus Sport 50M, measuring 164 feet. She still has a similarly vertical bow, though, and overall lean, sporty lines. Those lines, from Luca Dini Design, complement her intended performance, too, from Hydro Tec and Palumbo Superyachts’ in-house naval architects. (Palumbo is the parent company of Columbus.) According to the shipyard, the yacht topped out at 21½ knots during sea trials and hit a cruising speed of 17 knots. That cruising speed will suit transoceanic voyages as well. For better fuel consumption, her captain can pull her back to 10 knots. The shipyard says that her twin 2,600-MTU engines should consume 18½ gph (70 lph) at that speed. Furthermore, shallow-water destinations will be accessible, since her draft is 7’2” (2.2 meters).

The K2 yacht owner, now a three-time Columbus customer, made a number of special requests for the design. Although full details remain confidential, there are five staterooms for 11 guests, along with seven cabins for 11 crew. The owner collaborated with Luca Dini Design for the layout and ambience. He also requested that the engineering team keep sound and vibrations levels to a minimum.

You may get to see the design in person when the all-aluminum K2 debuts at the Monaco Yacht Show this coming September.