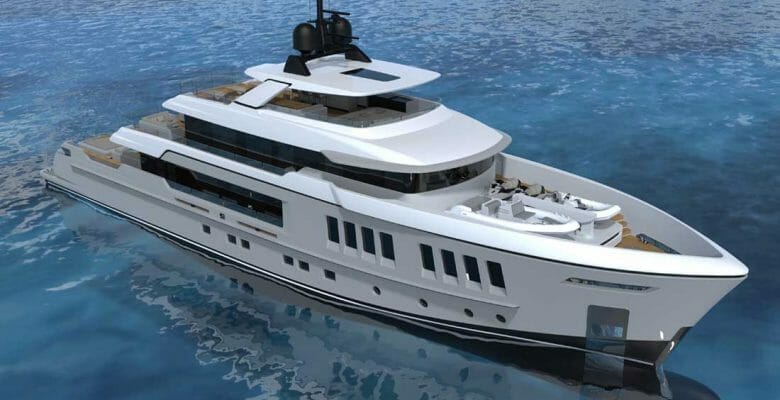 Similar to the yard’s other semi-custom yachts like the Flexplorer series as well as custom builds, the new model features a steel hull and robust redundant systems. The 139’7” (49.58-meter) megayacht carries 15,850 gallons (60,000 liters) of diesel, too. It’s more than enough to allow her twin Caterpillars to maneuver her from destination to destination without tying up at the fuel dock.

Bearing a 28-foot (8.6-meter) beam, the Cantiere delle Marche EXP 42 features styling and interior design by Francesco Paszkowski Design. Mindful that owners may want to visit the South Pacific as much as the South of France, alfresco areas contain private relaxation spaces plus see-and-be-seen ones. The pool on the aft main deck is a good example of the latter. The sundeck, meanwhile, is immensely private, with plenty of space for multiple people to stretch out in the sun. 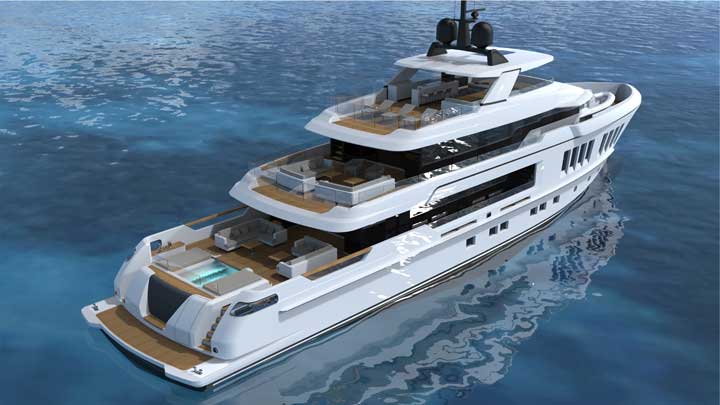 Since she’s semi-custom, the Cantiere delle Marche EXP 42 can include multiple layouts inside. Traditionalists may want four guest staterooms below decks and the master suite on the main deck, for instance. Avid cruisers who want to bound out of bed and head straight outside may prefer four VIPs on the main deck and two other staterooms below. Similarly, you can put the saloon and formal dining area on the main deck, or situate dining up one level.

Speaking of that level, wrap-around glass will make vistas in even the coldest climates more impressive. Folding balconies can have the same effect on the main deck.

Finally, the foredeck readily accommodates tenders and toys. However, the Cantiere delle Marche EXP 42 can stow them aft on the upper deck. A cleverly concealed davit launches them.