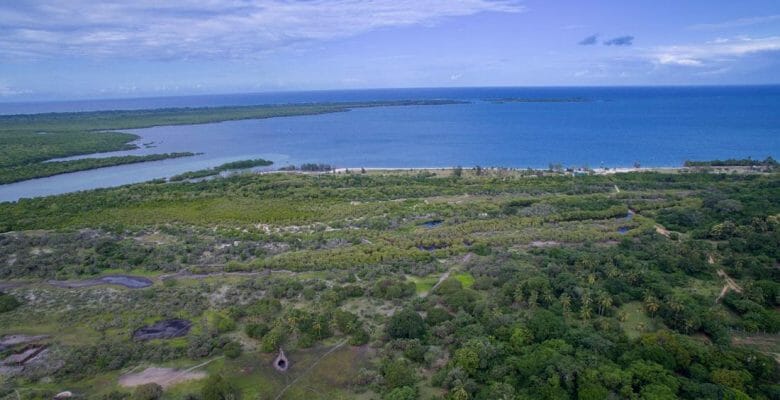 You’ve heard of carbon-offset programs, but what about blue carbon? Blue carbon refers to coastal systems that capture and store carbon. Since these ecosystems are vital to combatting climate change, Yacht Carbon Offset now has a blue carbon project, its first.

Since its founding in 2007, Yacht Carbon Offset has aided megayacht owners and charter guests in offsetting greenhouse gas emissions through contributions to eco-focused global projects. Blue carbon opportunities are especially important to promote, the organization believes. Specifically, mangroves, seagrasses, and other water-related plant life store carbon dioxide in their roots and other structures. They also send it into the soil. Furthermore, healthy oceans can sequester massive amounts of carbon dioxide.

Yacht Carbon Offset’s blue carbon initiative is in southeastern Kenya. It’s the Mikoko Pamoja mangrove-conservation and restoration project (pictured). It involves 289 acres (117 hectares) of mangrove forest. Additionally, it involves reforestation of the beach and the shoreline. The conservation and restoration work started, and received independent validation, in 2014. It’s a 20-year project, too, led by the local community. They strive to plant 4,000 fast-growing trees annually to supplement the mangroves. In fact, they’re planting Casuarina, a local species, to restore years and years of cutting down and exploiting the wood for construction and energy resources.

While Yacht Carbon Offset is not offering the trees as part of its program, it is underscoring how carbon certificates will make a difference. For example, deforestation leads to fisheries and wildlife habits suffering. Conversely, thriving mangroves spur other positives, including eco-tourism—which generates income for locals. Furthermore, the Mikoko Pamoja project funds are helping acquire schoolbooks, build schools, and provide clean drinking water.

Yacht Carbon Offset tailors this, and all of its programs, according to your specific needs.