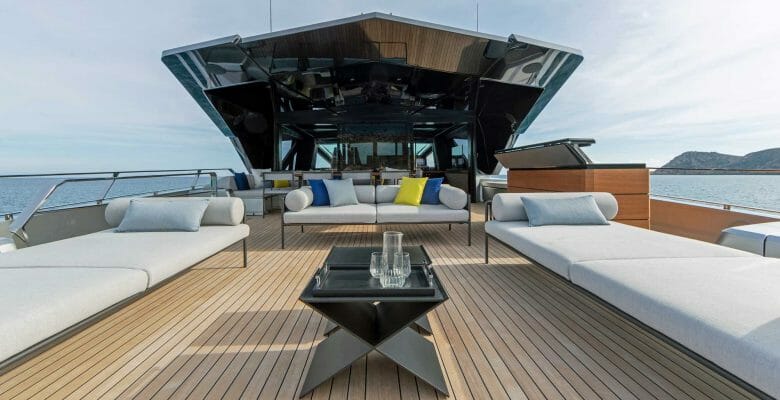 Since it will likely be the 2022 edition of the Fort Lauderdale boat show before the Wally WHY200 hits U.S. shores, American cruising enthusiasts eagerly seeking something out of the ordinary may want to head overseas for their first look. Wally describes her as a yacht where speed meets volume. It’s a bit of an understatement, though. This megayacht boasts about 50 percent more usable space than similar-size craft. Furthermore, she has features you simply don’t find even on larger yachts with the same volume. And, the WHY200 does this with far more efficient propulsion.

Wally projects have been seeing construction at the Ferretti Group’s Super Yacht Yard in Ancona, Italy since the brand’s acquisition in 2019. Unchanged, however, is the avant-garde styling and approach to space utilization, all from Luca Bassani, the brand founder. The two go hand in hand, too. The sharply angular superstructure of the WHY200, for example, allows for better volume than any other semi-custom craft in her range. Specifically, it’s 199 gross tons within an 88’8” (27.03-meter) overall length. While other shipyards have healthy-volume models, they’re still not close to the Wally’s figure.

The extra volume comes partly from a wider beam. The WHY200 is 25 feet (7.66 meters) broad, which you appreciate the most inside. It sounds counter-intuitive to recommend spending a lot of time inside a yacht. But, the 656-square-foot (61-square-meter) saloon simply cannot be beat. In fact, about two dozen journalists joined Bassani and Ferretti Group executives in the saloon for a press conference during the Monaco Yacht Show in September. The room (above) accommodated everyone handily, forward of the glass-enclosed stairway to the staterooms. That left an entire bar/show kitchen (with a sliding counter to hide the sink) and additional seating at the main-deck entry unused. More importantly, it left no one sitting atop the other.

The master suite (above), on the main deck, is hard to beat, too. You’d be wise to position the bed as shown, facing the 270-degree windows wrapping straight around the bow. Stand directly at one of those windows, and the sensation is “as if you are floating above the water,” Bassani says. The suite truly does push out  to the hull sides and yield this feeling, too.  Basani collaborated with Laurel Giles Naval Architects to ensure it would work. He additionally points to the yacht’s carbon fiber composite construction for making it possible. Oh, and as for space allocation, try 398 square feet (37 square meters).

Guests get true star treatment below decks. The full-beam VIP (above) could easily be the master suite on most other megayachts of this LOA. It even has a settee. The remaining two cabins are doubles on hull number one, but of course you can arrange them as twins instead.

The enviable spaces continue. The upper saloon, for example, has a handful of skylights and a sliding door opening it to the aft deck for a larger indoor-outdoor living/dining area. Opening platforms aft expand the already deep swim platform and open aft deck (above). Even your crew gets their own galley below decks, with stairs accessible via the show kitchen on the main deck. It’s in proximity to three cabins, including an en suite for the captain. Compare the space allocation to equivalent-LOA yachts, and there’s definitely a big difference here.

Finally, credit the choice of Volvo Penta’s IPS system with some of these space gains. But really, credit that propulsion system for its proven fuel efficiency and strong performance. The Wally200 comes standard with four Volvo Penta D13 IPS 1200s, pledging a 21-knot top speed under one-third load and with four people aboard. The same system should allow a range of 390 nautical miles at 18 knots and 1,000 nautical miles at 10 knots. Optional, higher-horsepower IPS units should permit a 23-knot top end and 350-nautical-mile range at 20 knots. Interestingly, you can still venture 1,000 nautical miles at 18 knots, with the addition of trailing pumps to the gearboxes.

The styling of the WHY200 surely doesn’t suit traditional cruising enthusiasts. But Wally and its customers have never been satisfied with tradition anyway.