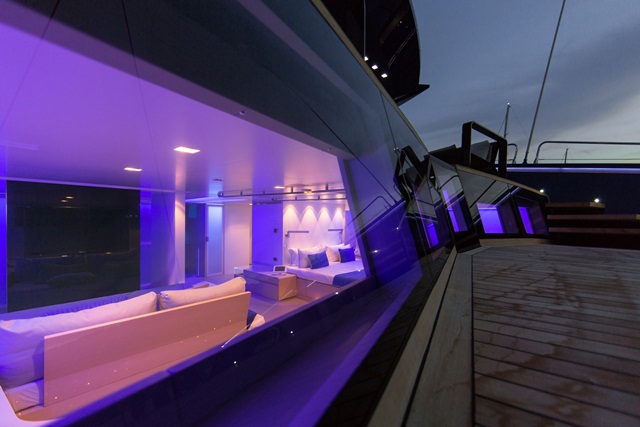 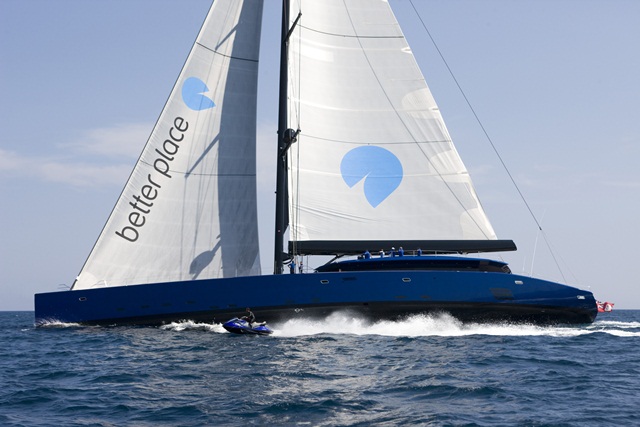 Better Place’s sleek lines, accentuated by a Bugatti blue paint job, are from Tripp Design, though you’ll also see a family resemblance to other previous Wallys. Take particular note of the raised bulwarks. First seen on the Wally Esense, from 2006, the raised bulkwarks offer better protection than rails and are more aesthetically pleasing, Wally believes. Also note the vertical bow, the angular superstructure, and the overall modern silhouette. 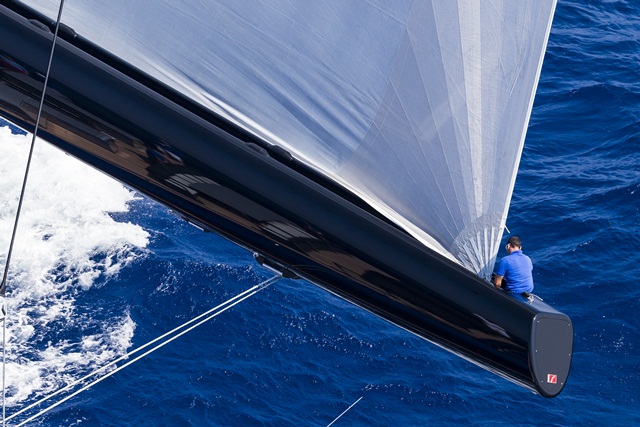 Better Place’s carbon fiber and advanced composites construction is also in keeping with Wally’s usual approach. The difference comes in the displacement: 250 tons, with 88 tons of it from the bulb and fin and 11½ tons from the mast, boom, and rigging. That overall displacement figure is about half of the displacement of similar-size sailing yachts from other leading yards. It, in combination with an 11,840-square-foot (1,100-square-meter) sail plan, ensures Better Place performs regardless of light air or 10 knots-plus wind. (She’s pictured here during the Maxi Yacht Rolex Cup this year.) Speaking of the sail plan, Better Place has an in-furling boom, self-tacking jib, Magic Trim system for the main sheet, and a custom staysail system developed by Wally that gets stowed in a forward deck locker. Push-button controls, another Wally highlight, control all.

Some of the hydraulic sail controls, like the inner stay furler and the sheet-tensioning devices, can alternately become electrical controls. This is thanks to the Siemens diesel-electric propulsion system. Three gensets produce about 945 hp, plenty of juice for these and other items aboard Better Place. While diesel-electric systems have been installed aboard a few motoryachts, no other sailing yacht has one. (If you’re thinking that Rainbow, the J-Class replica, does, it’s actually not a full diesel-electric system. The owner felt that the gensets that would have comprised such a system aboard Rainbow were too big. Her propulsion therefore comes from a custom system mixing traditional diesel power and diesel-electric.) Better Place’s reliance on diesel-electric therefore means lower fuel consumption, fewer emissions, and lower sound and vibration levels. 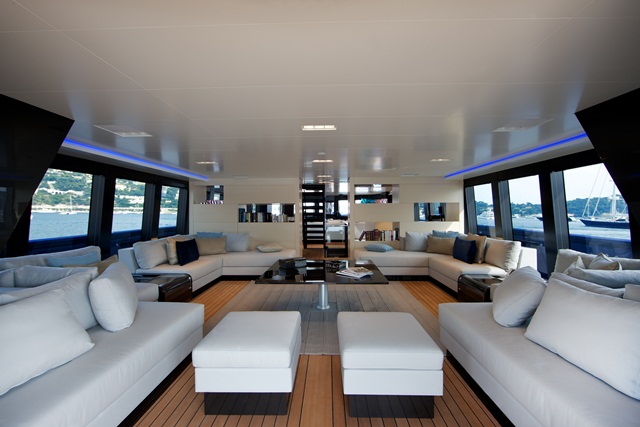 The lower sound and vibration levels make the already-serene interior environment even more so. Better Place has an open main-deck layout that feels like an indoor-outdoor space even when the aft sliding doors are closed. It’s thanks to full-height smoked glass to both sides. If the sliding doors are opened to make the alfresco lounging area part of the saloon, the seating capacity expands to 20. Dining can take place in the midst of the settees, since the coffee table converts for eight people. Parties of 10 can head forward to the dining area, though it, too, can convert, into a sumptuous settee, to make all of the nearly 926-square-foot (86-square-meter) enclosed deck area into one giant lounge. Even though bulkheads provide some separation between the dining area and the saloon, they have bookshelf-like cutouts in them, to minimize the division and enhance the openness.

Speaking of lounging, how’s this for a private relaxation space? The owner’s suite, just like Better Place’s saloon, is an indoor-outdoor affair. The outdoor “terrace on the sea,” as Wally likes to call it, is directly accessible from the suite. The suite itself, with leather underfoot that climbs seamlessly up each wall as a design feature, has huge ports on three sides as well as a skylight. And, if you look closely to the port side of the stateroom, you’ll see what appears to be another bed. Or is it an extra-large settee? It’s actually both, depending on Better Place’s owner’s needs. It faces the TV, so it’s a great spot to stretch out and enjoy a movie. It can be a more comfortable place to sleep when the megayacht is cruising downwind. 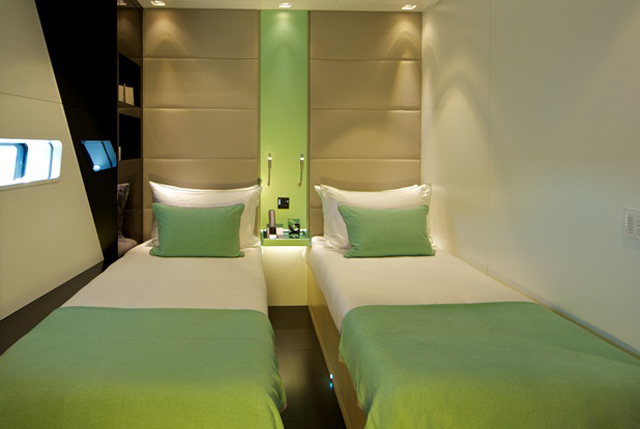 Lounging is definitely the watchword for Better Place. This Wally megayacht exudes a comfortably casual, beach-like vibe. Wetzels Brown Partners combined soft goods like oak soles, white-lacquered oak, and grey leather for much of the interior. This overall neutral setting can be amped up whenever the mood strikes the owner, or the guests, given LEDs installed throughout the yacht, including in the guest staterooms (two doubles, two twins, each differentiated by colored bedding). Name a color: blue, red, green, even purple, the latter appearing in the terrace photo earlier in this story. All set different moods. LED color strips also line the 33-foot-long foyer outside of the four guest cabins and leading to the master. And in case you’re wondering, yes, the LEDs inside the guest cabins can match the colors of the individual bedding… except for the black-bedded stateroom, though it looks and feels quite sophisticated with the blue lighting. 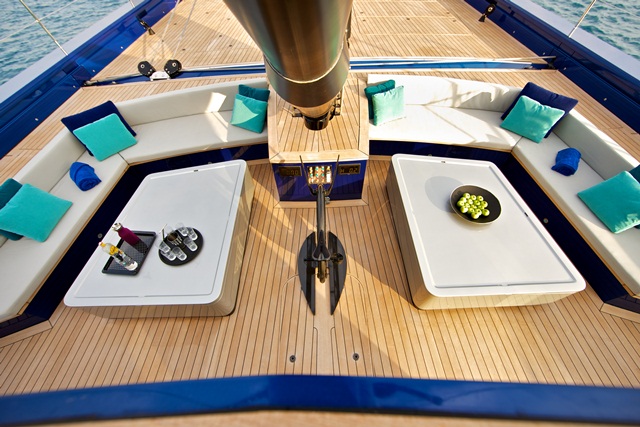 This being a bluewater-oriented megayacht, Better Place has excellent alfresco spaces, too. The forward cockpit can host a crowd of 20 for cocktails, meals, or simply sunning. It’s in proximity to the hot tub, which is below the deck level and therefore hidden when not being used. It’s also in proximity to both the dining area inside and a hidden pantry near that dining area. The pantry has lift-up panels that reveal a sink, refrigerator, and stowage for 20 place settings. A dumbwaiter connects the lower-deck galley, near the crew’s quarters for 10, to the main deck and upper deck. Wally designed the dumbwaiter to be visible, and to be different in that appearance, in keeping with the leisurely overall feel. It has three suitcase-like containers to hold cups, plates, and more, installed on an open, vertical track, so that the views fore and aft aren’t blocked. It’s also fronted with glass at about thigh or hip height on most adults—head height for the owner’s children, for safety, yet still allowing them to watch the mechanics of the operation. 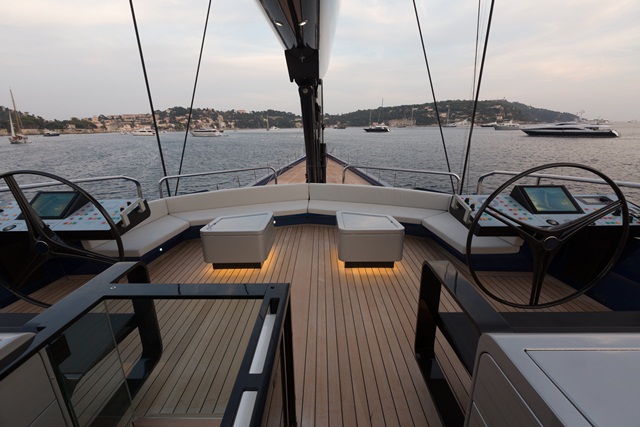 Children and adults alike can watch the navigational operations from the sundeck, where Better Place’s primary helms are located. (A foul-weather steering station is inside.) Seating forward of the helms faces aft, and anyone wanting a bit closer look at the instruments is invited to sit at one of the helm stations when the other one is the sole one in use. More people can spread out on sunpads aft, and the sunning space can increase if the crew drop the dining table (see below) and cover it with an inflatable mattress stowed aboard. Doing so makes Better Place’s sundeck feel like quite the floating playground. A barbecue, drinks area, and awning round out the features up here. 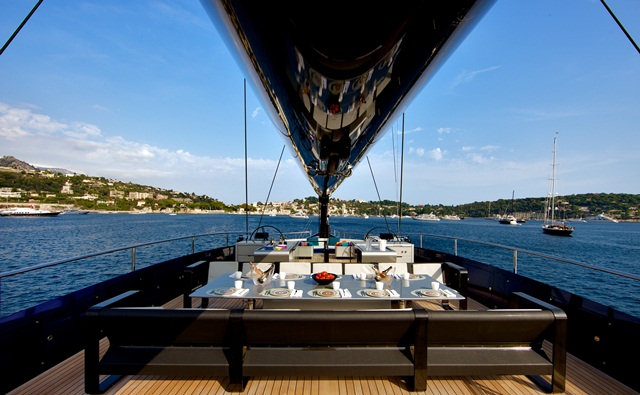 Better Place was commissioned by an owner who is quite committed to the concept of sustainability. “Better Place” actually comes from the name of his company, a firm that installs charging stations for electric cars to bolster their range while out on the roadways. Judging from the way his megayacht is arranged, the owner is also committed to making the cruising world a better place, for himself, his friends, and his family.