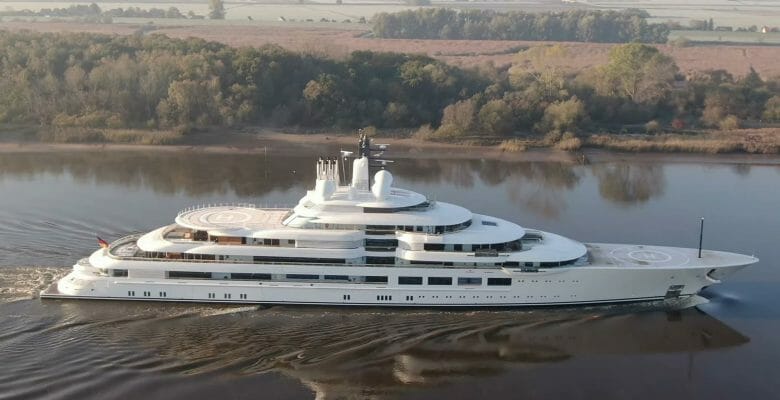 A superyacht among the 15 largest in the world is the latest impacted by sanctions over the invasion of Ukraine. The Italian government has ordered Scheherazade to stay put in a shipyard in Marina di Carrara. The freezing order comes as the yacht seemed to be preparing to depart within the coming days.

Members of Italy’s Guardia di Finanza boarded the 459-foot (140-meter) Scheherazade on May 6 to deliver the freezing decree. Italy’s Ministry of Economy and Finance issued a statement citing “significant economic and business links of the beneficial owner…with prominent elements of the Russian government.” Notably, it doesn’t name the beneficial owner. However, it adds that the Financial Security Committee has recommended the European Union add the owner to its sanctions list. Additionally, it indicates that “the boat had long been under the attention of authorities.”

Scheherazade, a.k.a. Project Lightning during construction at Lürssen, has been in Marina di Carrara since September. She entered a dry dock and remained under maintenance until refloating occurred on May 3. Unconfirmed reports had her subsequently taking on fuel, too.

Anonymous Italian officials and police have told media that they were having difficulty determining the owner’s identity. One group, however, says it has proof Russian President Vladimir Putin own Scheherazade. That group is the Anti-Corruption Foundation, a Russian watchdog group which publishes its research into high-ranking Russian government officials’ alleged illicit behavior. In March, the Foundation released a report indicating several crewmembers are employees of Russia’s Federal Protective Service. That agency guards Putin. The Foundation added that this proved records indicating that Eduard Khudainatov was the beneficial owner were false. Khudainatov, who isn’t on any international sanctions lists, previously headed Russian energy company Rosneft.

Maria Pevchikh, the Foundation’s investigative unit head, further posted on Twitter this past week that the Foundation provided this evidence to Italian authorities in March.