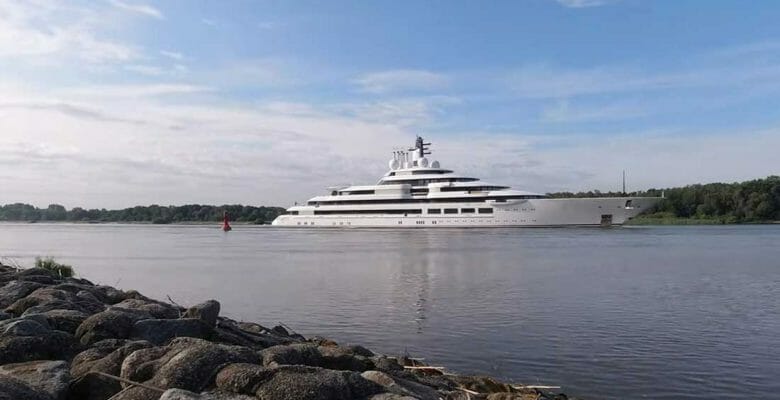 Currently on her maiden voyage, the megayacht long referenced by her code name, Project Lightning, has her nameboards uncovered and available to see. Scheherazade departed Lürssen, where she was built, and undertook a daylong voyage from Germany to Norway yesterday.

The 459-footer (140-meter) is one of the most anticipated megayacht deliveries of the year. Part of the anticipation, naturally, stems from her LOA. This makes her one of the largest private yachts in the world. In fact, she lands among the 100 largest worldwide. The anticipation further stems from the confidentiality cloud that hovered over her from the start of her build a few years ago. Neither Lürssen nor other parties involved in her design and construction have been able to comment about her features. Along those same lines, no confirmation exists of her exterior designer or interior designer.

Nevertheless, several features are readily visible, ensuring she will be recognizable as she cruises. For example, as you’ll see in some of the video footage, Scheherazade has two helipads. One of these very likely could be solely for the owners, in keeping with what several yachts with multiple landing areas do. Yet another striking feature is the abundance of glass. Notably, an atrium-like area amidships has a wall of glass extending more than one deck high. That should create quite a light, bright ambience inside, and amplify the excitement of guests and the owners as they pull into various ports.

Interestingly, Scheherazade has long deck lengths, without many fully exposed alfresco areas. However, a large fold-down platform nearly aft on her lowest deck may yield access to a beach club. Yet another fold-down platform lies further forward on this same level, perhaps letting the megayacht’s passengers board and disembark with ease.

Finally, Scheherazade has quite the exterior lighting design, letting her put on a show at night.