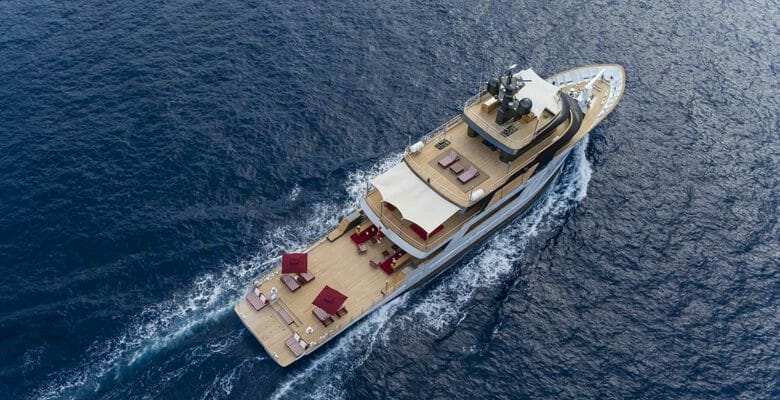 An avid yachtsman treated himself to the greatest treasure of all by refitting the motoryacht Masquenada for a round-the-world voyage where he’s enjoying extended stays onboard. “I bought time,” Pier Luigi Loro Piana shared at the re-launch at Lusben. Initially, he intended to build a new yacht capable of carrying plenty of people. “But any new build, sail or power, would have taken at least three years,” he points out. With the assistance of Lusben and Nauta Design, Loro Piana took delivery of an extensively redesigned yacht in just eight months.

Loro Piana, the deputy chairman of the Loro Piana clothing and accessories company, is a passionate sailor. Even with this penchant, he knew a motoryacht fit his global travel dream. He even went as far as coming up with a plan for a 190-footer (58-meter) with Nauta Design. The delivery time, though, kept it from becoming reality. “After one year from the loss of my beloved My Song, I started thinking I didn’t want to wait that long,” he confesses. Together with Mario Pedol of Nauta Design, Loro Piana sought a good refit candidate instead.

Conveniently, Pedol remembered the 167-foot (51-meter) motoryacht Aspire (above), having been onboard a few years prior. Her size, along with her transoceanic range and 600 tons of volume, convinced him Loro Piana would be satisfied. He was right. With a tight makeover timetable, Aspire arrived at Lusben, the refit yard belonging to Azimut-Benetti, in September 2020. Eight months later, she emerged as the completely re-imagined Masquenada.

Few areas went untouched, in fact. For instance, the previously industrial-like main aft deck, which included a big crane and twin stairs to the engine room, is now a capacious leisure space. It’s essentially Masquenada’s open-air beach club. Lusben removed the crane, plus the aft bulwarks to make the deck flush. Loro  Piana and his family can easily access the water  or the main saloon from here. Additionally, tenders and toys can stow on deck when cruising, launching via a new, custom crane that stows away in its own compartment. The farthest aft end can support helicopter touchdowns, too.

While the main dimensions of the upper and bridge decks suited Loro Piana’s plans, still, he wanted changes. Both are now about five feet (1.5 meters) longer at their aft ends, for more shade and aesthetics. Overall, the decks cater to lounging, dining, and taking in the views. Speaking of views, two guest suites (among five for friend s and family) sit on the main deck, with large windows. More visibility-oriented changes took place forward on the upper deck, specifically benefitting the master suite. The bulwarks are lower for better views, fitted with electric louvers in the cut-out areas to provide shade or privacy.

Masquenada is currently in the midst of a three-year global excursion. “This was an extremely demanding project,” says Michael Amato, Lusben’s business-development manager. Between Loro Piana getting his wishlist and the timetable, he continues, “I think he was very, very satisfied with the outcome.”

Respecting deadlines and rising to challenges like Masquenada fall into Lusben’s strategy, Amato adds. “In a situation where delivery times are getting longer and longer, that becomes more and more pertinent to us in the refit sector,” he says. “Even the current boom in new builds should have a positive impact on Lusben. “The fleet size is growing, and boats that are launched will always need to be maintained,” Amato points out. “At a certain point, it needs to undergo some level of refit, which means we are quite confident that the refit sector presents an interesting opportunity for a stable upward trajectory in growth.”