Home / Yachts / Heesen Project Orion Can Be Yours for 2025 Cruising 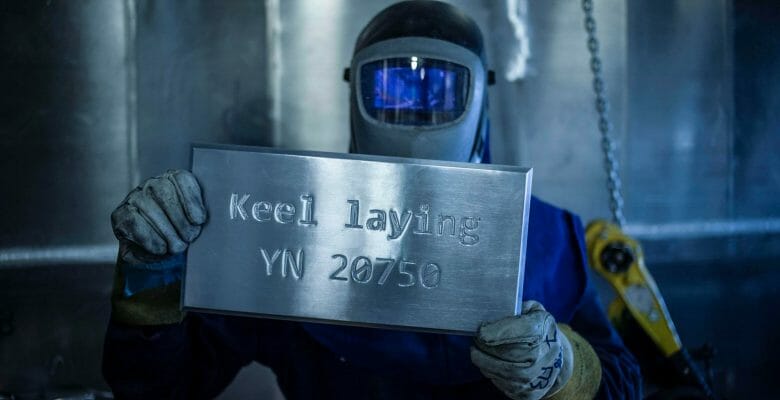 September saw the keel laying for the Heesen Project Orion spec build, the latest in the shipyard’s 50-meter (164-foot) all-aluminum, fast-displacement hull form series. Since the shipyard has her for sale for delivery in February 2025, several proven features are attracting attention from buyers.

Secondly, since other yachts on the water have this hull form, along with the same hybrid propulsion system, the shipyard is confident that Project Orion will perform as anticipated. Specifically, it says she will burn just 12 gph (45 lph) at 10 knots in hybrid mode. At a slightly higher cruising speed of 12 knots, meanwhile, she should burn  an equally low 26 gph (98 lph), excluding what’s required to power the air conditioning and other hotel loads. Additionally, the shipyard says that her twin MTU engines, which comply with the IMO’s Tier III emissions regulations, are a lower-horsepower and more compact model than traditionally found on megayachts of her size.

Also attached to the Heesen Project Orion is interior designer Cristiano Gatto. Interestingly, he, too, is involved with Project Jade. For the new 164-footer, Gatto is enhancing the sense of volume and brightness coming from the floor-to-ceiling windows and open bulwarks. He’s suggesting a contemporary décor to make owners and guests better enjoy the cruising lifestyle throughout the decks. In terms of staterooms, a party of 12 has two twins, two doubles, and a VIP suite below decks, along with the master suite on the main deck. Of course, Gatto will tailor tones, textures, and materials to the liking of the eventual buyers.

Friso Visser, Heesen’s CCO, points to the success of its series builds in expecting Project Orion to find owners soon. “The idea of advancing the build by a year or two before the customer signs up reduces delivery time, along with the costs saved in design and development,” he notes. “It has proved to be a winning formula.”