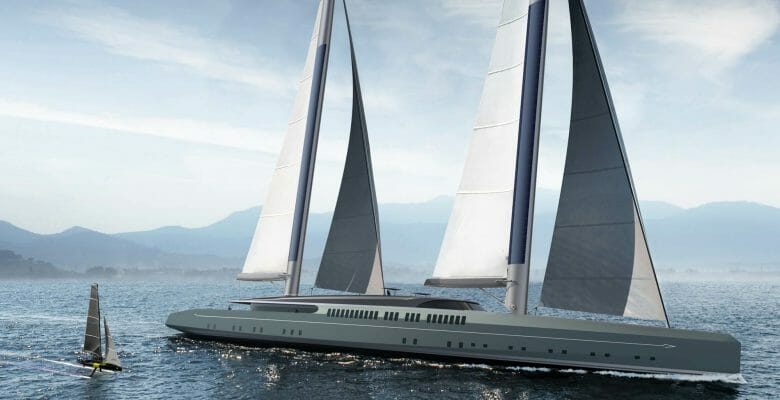 The sight of a nearly 330-foot (100-meter) sailing superyacht is impressive enough. One of that size achieving 24 knots is even more remarkable. Add to the mix freestanding, rotating wing masts with airfoil profiles, and you have a project for forward-thinking owners. The Royal Huisman Wing 100 concept design intends to spark the interest of not just sailing enthusiasts, but also power cruisers looking to reduce their carbon footprint.

The shipyard joined forces with Dykstra Naval Architects and Mark Whiteley Design for the concept. Clearly, “Wing” in “Wing 100” comes from the rig. Two 239-foot (73-meter) wing masts—which Royal Huisman’s sister company, Rondal, can make—are rooted in proven technology. They further offer a handful of handling and performance advantages. Firstly, mainsails hoist in minutes. Staysails unfurl and trim easily as well. Additionally, all rig management comes via remote control. Should the Royal Huisman Wing 100 encounter strengthening winds, the crew can quickly de-power the sail plan, preserving a modest heeling angle and therefore comfort. Finally, the yacht can head off on short passages under sail quicker than yachts with conventional sail rigs, due to the latter requiring more time to set up. (That same issue often leads to conventional sailing superyachts relying on an engine for short voyages, too.)

Further benefits come from the design as well. Airfoils, for instance, are structures curved to give the most favorable lift-to-drag ratio. Royal Huisman says the crew can adjust the airfoil shape via remote control, too, to increase or reduce power. When the wing masts rotate, more powerful performance results, since the sails are integrated with the airfoils.

Of course, the Royal Huisman Wing 100 needs equally strong aesthetic appeal to get clients to the negotiations table. The 60-degree bow notch at deck height, the expansive flying bridge, and long, lean lines are starters. Mark Whiteley Design will customize the interior design and deck arrangements to clients’ liking, but has several strong suggestions for starters. An entire cabin deck houses the master suite, a VIP suite, and five guest staterooms, along with a nanny/tutor cabin. The owners’ party of 16 can enjoy alfresco dining on the flying bridge, plus indoor-outdoor dining and cocktails on the main deck. With support from 16 crewmembers, the group can board watertoys and tenders from an ample “beach deck” swim platform. Venturing throughout the yacht comes easily, via a guest elevator as well as stairs.

The captain and crew, meanwhile, are not left out of thoughtful amenities. They have a dedicated lounge forward below decks, adjacent to their cabins. And, while twin helm stations are on the flying bridge, a bridge deck exists, too. In fact, for better visibility when sailing, it sits a half deck between the main deck and flying bridge. It further doesn’t take room away from or get impinged by the guest areas below.

Should a customer sign the Royal Huisman Wing 100, she’ll be among the world’s 10 largest sailing yachts. That top 10 includes other Royal Huisman builds like Athena and Sea Eagle II.

“The emergence of sailing yachts on this scale, with the level of energy efficiency and eco-responsibility offered by Wing 100, would have been unthinkable just a decade ago,” says Jan Timmerman, Royal Huisman’s CEO. “The team is incredibly excited to be at the forefront of this conceptual revolution.”