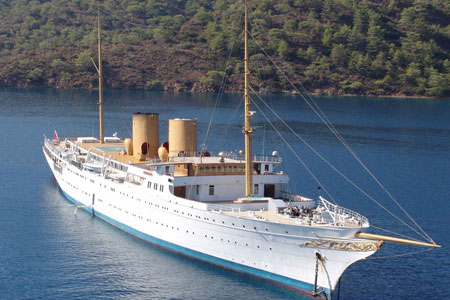 New yachts naturally attract a lot of attention. However, several megayachts making the rounds of the world’s oceans merit equal, if not more, attention. Why? They’re the oldest yachts in the world. Thankfully, in the case of the six yachts on the following list, age doesn’t mean “aged.” Indeed, despite their hulls having seen dozens of decades, these six superyachts are in Bristol condition. They also exude the grace and style of their eras, both inside and out.

1. Madiz. Year of build: 1902. Not only is Madiz the oldest yacht in the world, but she’s also the oldest with either a steel or iron hull to still have Lloyds classification. Ailsa Shipbuilding in Scotland constructed her, to a design by G.L. Watson & Co. Imagine if her bulkheads could talk. She was a purely pleasure yacht from delivery to 1914, when she was put into service as a patrol boat during World War I. She did the same in World War II, then returned to private usage. Her current owner had her undergo a rigorous three-year refit starting in 2003 to bring her back to Lloyds classification, as a previous owner had let it lapse. Amazingly, much of the original woodwork was salvageable. This includes teak decking and interior paneling such as the Cuban mahogany used in the master staterooms and the oak used in saloons and other gathering areas. Madiz spends time these days in Greece.

2. Delphine. Year of build: 1921. Great Lakes Engineering Works may be long gone, but Delphine keeps the builder’s name alive. She was commissioned by Horace Dodge, of the famous automobile family of the same name. Delphine hosted many a cocktail party and viewing party for the speedboat races that Dodge’s son participated in. Despite a horrific fire in 1926 that sank her, Delphine was salvaged and restored. Like Madiz (and pretty much every other yacht of the early 20th century), she, too, saw wartime service. She later served stints as a training ship. From 1998 to 2003, she underwent a thorough refit, since plans under previous owners never came to fruition. Today, Delphine spends time in Monaco, hosting day and weekly charters.

3. Haida G. Year of build: 1929. Launched as Haida for American millionaire Max Fleischmann, Haida G undertook an ocean crossing from Germany to New York as her maiden voyage. Fleischmann had her continue on to California, where she remained under his ownership until 1940. That’s when she was handed over to the Navy for military duty, though she remained on the West Coast. Following the end of the war, Haida returned to pleasurecraft status and was rechristened Sarina and relocated to Egypt, then the South of France. A few more dedicated owners followed through the 1960s, including music and movie producer Robert Stigwood, who entertained plenty of celebrities onboard on a regular basis on both sides of the Atlantic. Another famous owner, after Stigwood: the late Andreas Liveras, who ran the successful charter firm Liveras Yachts. Under Liveras’ ownership, the yacht was known as Rosenkavalier. Finally, in 1999, the current owner acquired her and gave her the name she bears today, as a tribute to her origins. While the yacht had been maintained, she still needed quite a bit of work due to her age. Haida G now cruises and charters regularly, amazingly powered by her original engines.

4. Talitha. Year of build: 1929. Named for the wife of J.P. Getty, Talitha started life as Reveler. She was built in Germany at Frederich Krupp Germania Werft, to a design by the famed Cox & Stevens. While she’s had several different owners over the years, she’s perhaps most famous for being owned by two particular people/families. There’s the Getty family, of course, which still owns her, but there’s also Robert Stigwood (just mentioned above), who christened her Jezebel in 1983. In fact, it was Stigwood who had the yacht restored to her original lines. (When she served as a gun boat during World War II, her beautiful bowsprit was removed, and subsequent refits failed, for whatever reason, to restore it.) These days, Talitha is among the most popular charter yachts.

5. Nahlin. Year of build: 1930. Recall the information mentioned above about how pretty much every yacht from the early 20th century was pressed into war service. Nahlin is an interesting exception. She escaped service because of odd circumstances. King Carol of Romania acquired her in 1937, but he stepped down two years later and left the yacht, unused, along the Danube, even though World War II was already underway. The yacht remained there for decades, in fact, until at some point (no one is exactly sure when) she was turned into a dockside restaurant. The restaurant went out of business, and Nahlin deteriorated. Thankfully in 1988 William Collier, a yachtsman fond of classics, decided to acquire her. It took 11 years, but Nahlin was finally towed out of Romania. Collier enlisted her original designer, G. L. Watson & Co., to oversee her restoration. More than a decade of redesign, re-engineering, and reconstruction ensued… until at long last, in 2010, Nahlin was back in business.

6. Savarona. Year of build: 1931. If you think yachts are expensive these days, imagine the huge sum of money that $4 million, the build cost for Savarona (above), represented in the 1930s. Fame came to Savarona during service as the state yacht of Turkey in 1938. She was used by Mustafa Kemal Atatürk, the founder of the Turkish Republic, until his untimely death a year later. Despite that, the Turkish government held onto the yacht until 1988, when it issued a 49-year lease to a Turkish businessman named Kahraman Sadikoglu. He spearheaded a restoration that saw her grand internal staircase restored and a stateroom devoted to Atatürk, complete with mementos and artifacts of his time. The yacht has been chartering ever since, entertaining celebrities like Hugh Grant, heads of state like the late Prince Rainier, and more. She grabbed headlines recently, too, but for all the wrong reasons. Savarona was seized in a prostitution scandal in September. Sadikoglu says he had no prior knowledge that the charter party planned this type of activity. An investigation continues into the people who were arrested. Some Turkish government officials are so upset by the scandal that they want Savarona’s lease permanently revoked and the yacht turned into a museum.