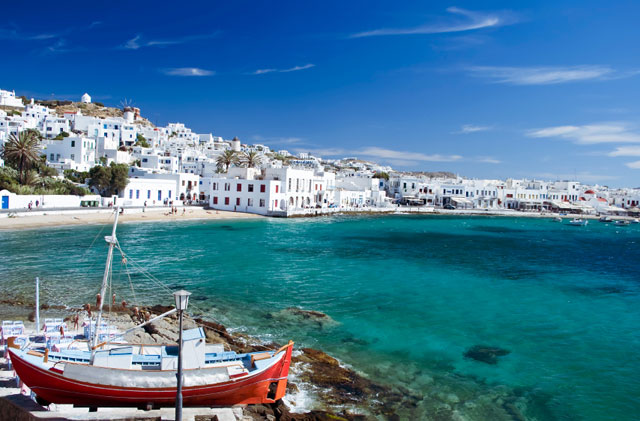 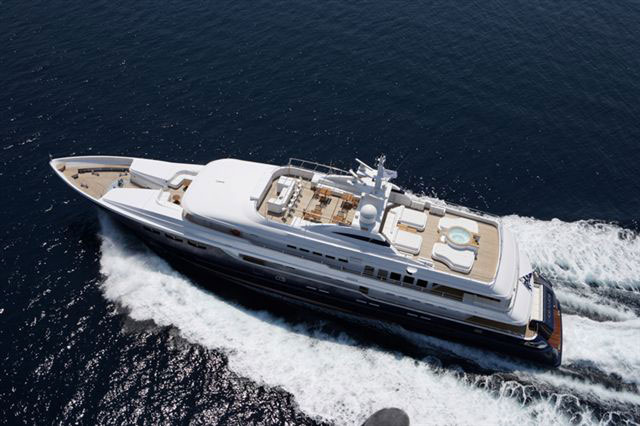 Greece has long been a popular cruising and charter destination for megayachts, particularly among Americans. The country’s rich history, tranquil anchorages, beautiful beaches, friendly people, and of course fantastic food are just some of the many reasons.

Even with the severity of its economic crisis, tourism is not waning. In fact, visitors to Greek islands and ancient ruins regularly pump about 15 percent into the economy and help pay for one in five jobs. In addition, the United Nations estimates that Greek tourism will rise 20 percent this year.

If you’ve never cruised Greek waters, you’re in for a treat. The Cycladic Islands, which include the famed isles of Mykonos and Santorini, are among the favorites of Megayacht News’ editor, Diane M. Byrne. They’re also a favorite of many charter brokers. Missy Johnston of Northrop & Johnson Worldwide Yacht Charters is among them, and she suggests the following weeklong itinerary. Among the yachts available there is the 162-foot O’ceanos (pictured). One word of warning, however: The Meltemi winds can blow at anytime during the warm months from May to October. If they’re blowing too strongly, cruising through the Cycladic Islands may not be possible, so another alternative itinerary through protected islands will be arranged.

Join your yacht in Athens, unpack, and relax as you begin your cruise to Kea, a 40-mile steam. The exceptionally picturesque island lies 15 miles from the southeast coast of Attica. The mountain masses, encountered in most of the Cyclades, are broken up by small valleys sparsely planted with vines and fruit trees and run right down to the sea, opening out into pretty little bays.

Visit one of the island’s peaceful beaches at Pisses, Korissia, or Koundouros. Cruise to the western side of the island into Agios Nikolaos Bay and deep within it to the port of Korissia, which is considered to be one of the safest natural harbors in the Mediterranean. Overnight in the port of Korissia, perhaps enjoying evening mezes (appetizers) or dinner at a harborside traditional Greek taverna, many of which offer fresh seafood.

Cruise to Tinos, the “Holy Island of the Cyclades.” It’s site of the Church of Evangelistria, which houses an icon of the Annunciation that draws thousands of Orthodox Christian visitors, especially on the feast day of August 15.

On Tinos, there are plenty of good beaches as well, most notably the ones at Agios Fokas near the town, Kionia, Porto, Panormos Bay, Kolimbithra, Agios Sostis, and Pahia Amos.  The lunar-type landscape at the spot known as Volax, with its peculiar boulders, is worth a visit. Also make sure you purchase, or at least sample, the locally made, high-grade cheeses like kopanisti and mitzithra.

Cruise in the afternoon to Mykonos (above). Quite cosmopolitan, Mykonos justifiably attracts tourists from all over the world. The capital Chora, with its colorful harbor dotted with fishing boats nested happily side by side with luxury yachts, presents quite a different picture from that of the majority of Aegean island towns.

One of the most charming districts of Chora is Little Venice. Pretty houses belonging to the island’s sea captains are built right on the rocks, lashed by the sea. You’ll also see the island’s mascot, Petros the pelican, which can be seen trying to bite tourists along the main quay. Spend time wandering the many alleyways of Chora, filled with shops and boutiques. This island is also well known for high-end jewelry. Later, stop and sit at a harborside cafe for a cool drink and watch the world go by. At night, check out the happening bars and discos, some of which are open until sunrise.

Late morning, cruise just a few miles and anchor off Delos, taking the yacht’s tender to the quay. This spiritual island can only be visited during daylight. Delos was the religious capital of the Ionians in 1,000 BC. According to Greek mythology, Leto, one of Zeus’ lovers, gave birth to Apollo on Delos. Delos’ greatest period was in the 3rd to 4th century BC, when the tiny island had a population of 20,000 and was the chief financial center and slave market in the Mediterranean.

Wander through the excavated ruins, such as the Avenue of the Lions, the theater, and many one and two-story houses with mosaic floors, like the House of the Trident. A flight of steps ascends to the island’s summit, Mt. Kynthos, the birthplace of Apollo.

After working up a thirst, head back for a swim and have lunch on the aft deck of your yacht. Then, cruise to Paros, the third-largest of the Cycladic Islands. Gently rolling hills surround the center and southeast of the island, which are covered with endless vineyards. Definitely visit Monastery of Katapyliani (“Church of a Hundred Gates”). It’s in a wooded park near the harbor and one of the most important Christian monuments in Greece.

Along the beaches near Naoussa, huge rocks have eroded into strange shapes, like sculptures in the sand. Anchor off Langeri, a secluded sandy beach, or off of Drios beach, where a fabulous fish taverna is ideal for dinner. 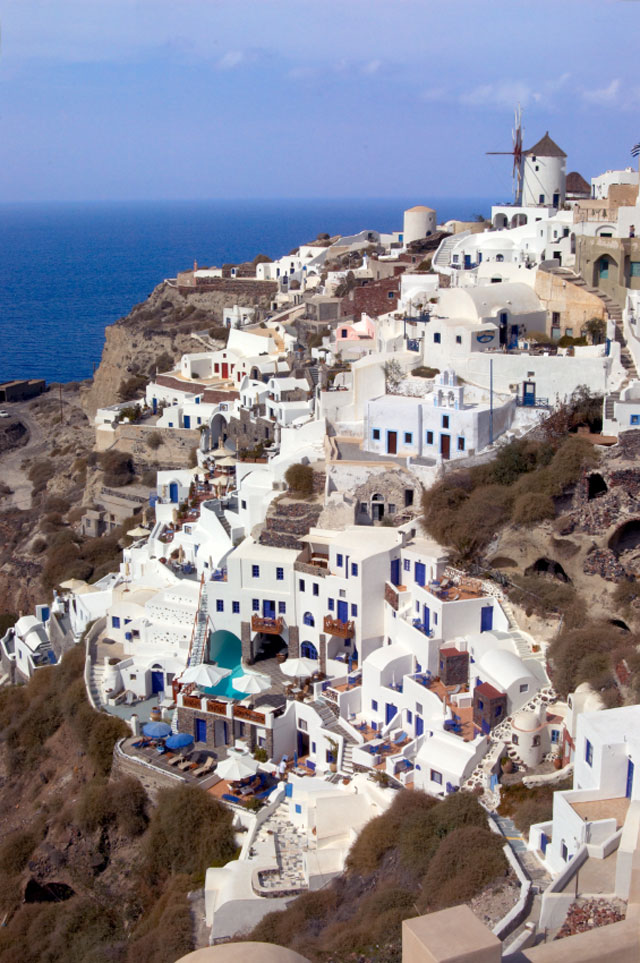 Cruise to Ios, locally called Nios, an island dating to prehistoric times. Homer is said to have been buried at Plakotos, at the northern end. Ios also has the remains of an ancient aqueduct, an ancient temple, a ruined Venetian castle, and more.

Exploring the capital means walking, so depart your yacht in the cool part of the morning. One hour is enough to enjoy its whitewashed village, perched on the slope between the port and Mylopotas. Then, enjoy Ios’ excellent beaches, like Kalamos, a natural reserve on the eastern coast; Papa; and Manganari.

After lunch, cruise to Santorini (above). As you approach its black cliffs of volcanic rock, it’s easy to imagine the cataclysmic volcanic eruption that created this crescent-shaped island. The main town, Thera, is atop the cliff. There are three ways to get there from Skala, the main port: mule, foot, or cable car. The most popular is mule. Also be sure to take the yacht’s tender to Nea Kammeni, where hot air and sulphuric steam still rise from the volcanic crater. The land is warm, so wear sturdy shoes and take plenty of water. Hot springs exist at the nearby Palia Kammeni, where the sea is sulphur blue.

Santorini is well worth exploring over a few days. Most people want to visit the two towns of Thera and Oia.  Both tumble down the sides of the Caldera, with the patio of one building resting on the roof of the building below. Thera is filled with shops and boutiques of designer goods as well as locally made items like lace.  Oia is more of an artist’s colony and is filled with art galleries. Inland is the Boutari Winery, with a showroom for tastings. (The unusual black sand, volcanic in nature, produces excellent grapes.) Don’t miss the excavation site of Akrotiri, an ancient settlement some believe is the lost city of Atlantis. If not open, visit the artifact museum in Thera.

Cruise in the afternoon to Sifnos, a mountainous island dating to 3000 BC, with fertile valleys and beautiful beaches. The first inhabitants were the Kareans and the Phoenicians, famed for their wealth, which came from gold and silver mines plus stone quarries. Kastro, Sifnos’ capital from the 14th to the 19th centuries, retains medieval character. The town was built on a rocky outcrop with an almost sheer drop to the sea on three sides. There is also a small archaeological museum, which exhibits a collection of Archaic and Hellenistic sculpture and ceramics from ancient times to the Byzantine era. There are clean and attractive beaches all over the island. Platygialos is a large sheltered beach, Vathi is one of the most beautiful beaches in Greece with fine sand, and Apokofto is a sandy beach with a rocky shelf near Chrysopigi.

To overnight, cruise to Herronissos, another traditional fishing village on the northern end. It’s renowned for handmade ceramics, sold in the village shops.

As your yacht glides into the port of Livadi, you’ll glimpse the towering hills of Serifos flecked with the white, sugar-cube houses, landmarks of the Cycladic Islands. Perseus, the mythological hero who killed Medusa, was born on Serifos.

The greatest attraction of Serifos is its magnificent beaches. The beach of Psilli Ammos, which lies about 2 km to the east of Livadi, beckons with the softest and whitest sand. Close to the monastery of Moni Taxiarchon is Platis Gialos Bay, ringed by three small, nice beaches.  Koutalas is an attractive village with a beautiful bay and a lovely beach, secluded from the winds.

After anchoring in a beautiful bay for lunch, in the afternoon cruise to Kithnos, an island named after Kithno, king of the first settlers, the Dryopians. Thermia is what many locals call it, due to the many thermal springs. Kithnos has shops selling beautiful folk-art objects, shells, leather products, ceramics, wood carvings, and vividly colored woven fabrics. The island is also packed with pretty little bays. Chora or Messaria is the island’s capital, noted for churches with fine wood-carved sanctuary screens and icons. Also visit the Church of Panagia Flambouriani, in the village of Flambouria, southwest of the town of Kithnos. According to tradition, there are traces from the steps of the Virgin all the way from the beach to the church.

Depart in the morning for the 50-mile cruise back to Athens.