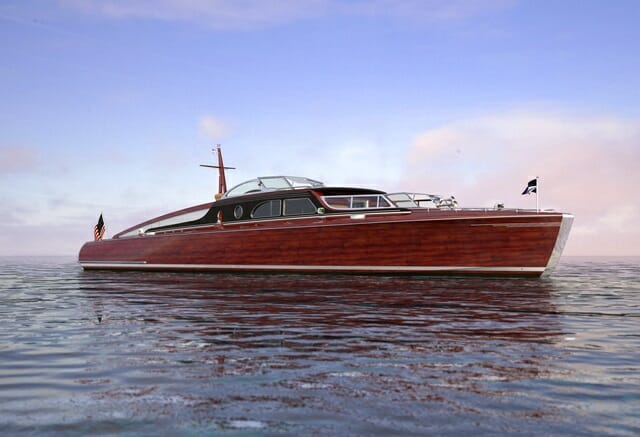 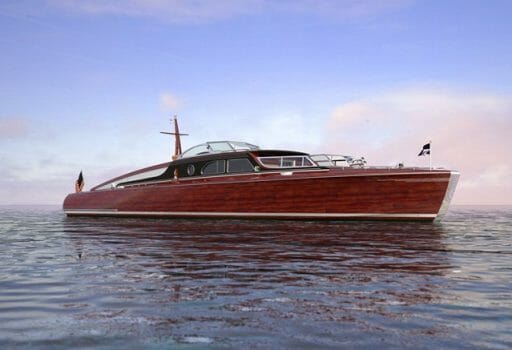 Posh, one of the most famous mahogany commuter yachts from the early 20th century, is the basis for a new series of luxury speedsters being built in America that still employ wood construction but adhere to modern superyacht standards. In fact, the series is being targeted to owners of these large yachts who want a particularly special tender. It’s thanks to the vision of an experienced yacht owner, Bill Prince Yacht Design, and Brooklin Boat Yard.

Posh, which measures 52 feet (about 15.85 meters), is being used as the starting point for the megayacht tender series for a few reasons. Posh was built in 1937 to a design by John Hacker at Michigan-based Huskins Boatworks. Hacker is renowned for creating the V hull and designing some of the most famous speedboats of the early 20th century. In fact, Bill Prince, founder of Bill Prince Yacht Design, says Hacker’s designs won more world speed records than those of his competitors combined. (Posh is capable of 36 knots.) Of course, it also helps that Posh is presently owned by a mahogany boat enthusiast. He’s F. Todd Warner, a Minnesota native who has owned and/or restored about 1,000 such craft over the past four decades. He runs Mahogany Bay, which performs restorations. Warner has taken Posh to classic boat shows around the country, hosts charitable events, and generally enjoys cruising aboard. 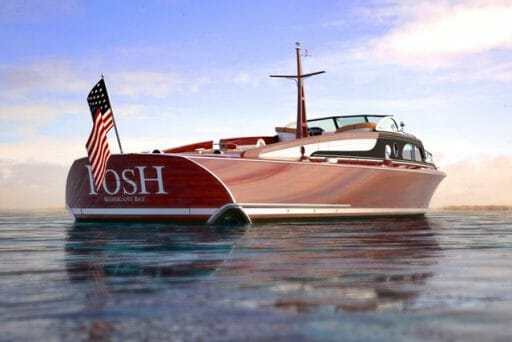 Prince explains that about a year ago, Warner asked him to design a yacht that embraced the best of Posh’s characteristics along with the best attributes of two other Hacker-designed and Huskins-built mahogany commuters from 1936 and 1938 that still survive. Those two boats are the 44-foot Tempo, originally built for Jules Stein, the founder of MCA; and the 55-foot Thunderbird, built for George Whittell, Jr., a famous (and infamous) playboy in California and Nevada particularly during from the early 1900s to the 1930s. Posh, Tempo, and Thunderbird are the only three commuters produced by Hacker and Huskins, and it’s additionally worth noting that they were built back to back.

Prince says that even though Huskins Boatworks is long gone, he was able to analyze Posh and the other commuters’ designs as well. Prince determined that an LOA about two and a half feet longer than Posh and a beam a few inches wider would serve the new Posh Series well. In addition, there’s more bow flare, 20 percent more displacement, plus new chines and a new overall running bottom for faster speeds. 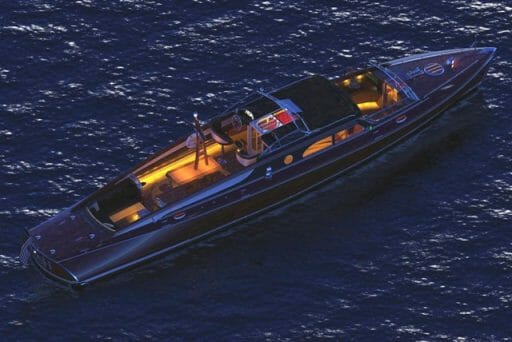 How fast? Try 50 knots or better, depending on the power choice. There are both twin gas and twin diesel options, from Cummins, Volvo Penta, and other major engine manufacturers.

As for the superyacht connection, plenty of megayachts tote classic and modern mahogany runabouts as tenders, but Prince says Warner really wanted the Posh Series to up the ante. “They’ll be built to a standard not previously available,” he says, with modern conveniences like air conditioning, refrigeration, and pop-up TVs. Also picture custom Tiffany crystal, luxe leathers from Louis Vuitton and other brands, barware from Baccarat and Cristofle, and more high-end soft goods.

The first hull in the Posh Series should start construction in early 2013 at Brooklin Boat Yard and should be ready in 2014.

Designers often talk fondly of their work, and Prince’s pride is no less evident. “It’s been one of the most remarkable design projects of my career,” he says.

For more information about the Posh Series directly from Bill Prince Yacht Design and Mahogany Bay, please fill out our contact form.